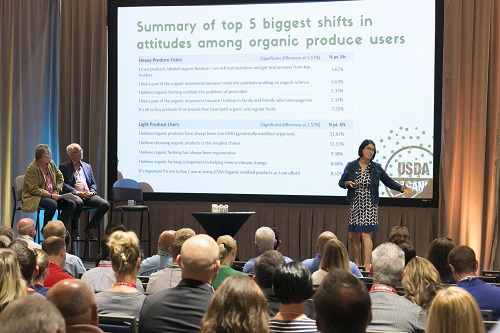 Steve Lutz, regional vice president of the Produce Marketing Association and Laura Batcha, executive director of the Organic Trade Association, came armed with charts and graphs to illustrate the latest research on consumer attitudes and motivations. Lutz was quick to point out that the opportunity for continued growth in the organic space is impressive. “If you look at four years’ worth of data, 2015 through 2018, and separate out conventional and organic, there was almost no growth in conventional produce’ “he said.  “The growth of produce was coming almost exclusively in organic and organic is only five percent of total volume going through conventional stores. What a spectacular opportunity.”

Batcha’s data reinforces the point. OTA’s research separated consumers into four categories:  devoted, temperate, dabblers and reluctants--- and then looked at attitudes associated with each. “Don’t spend your time and energy trying to make a believer out of non-believer,” Batcha told the audience. “The opportunity is with temperate to devoted. Conversion of light organic consumer to devoted would double the category.” 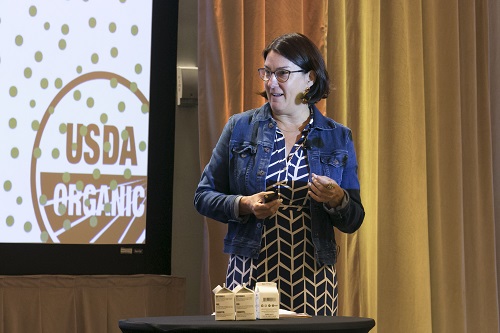 The challenge is finding ways to move the consumer who buys organic some of the time into the category of consumer  who buys organic all of the time. OTA research surveyed 3,000 consumers to find what messaging resonates enough to impact buying choices. According to the research, the term “regenerative” – a buzz word in organic circles these days – doesn’t mean much to the average consumer, but the idea behind it is important, especially to millennials.

“We are starting to see the ground shift from a basic understanding of organic that we’ve had for a couple of decades now,” Batcha said. “Now, especially millennials are starting to think more broadly. They are caring about biodiversity, soil, water quality and this idea of reversing climate change.” 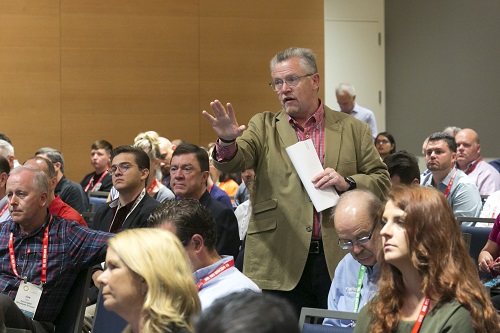 Organic needs to drive home that point, but Batcha says while this new messaging is impactful, she cautions against abandoning the tried and true. “The non-GMO message still resonates. People want that reassurance. For folks in the industry this may be yesterday’s news but for the shopper it’s not,” she said.

The Organic Produce Association took a deep data dive into the issue of value and price pressure. Right now, on average, organic prices are about double that of conventional produce. Lutz said research found the price question is big for “light” organic users. 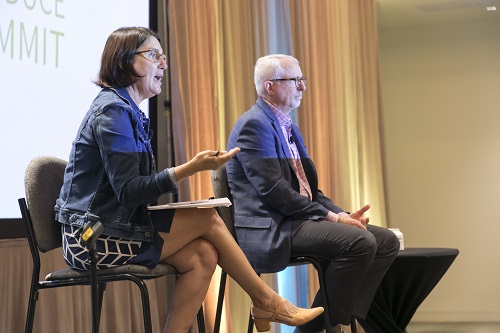 Laura Batcha of OTA and Steve Lutz of PMA

Lutz maintains that organic producers and retailers can tackle the value issue without giving up margins. He told the story of CMI Apples and its Daisy Girl Organics. The apple grower introduced a two-pound package of apples, moving away from the traditional three-pound mesh bag. The smaller package came with a lower price point and packaging that was easy to integrate into store displays alongside conventional options. Daisy Girl became the number one selling organic apple in the country over a three-year period. “Consumers sucked it up because of a better price point, attractive packaging, quality was consistent with what light users  were seeing in the rest of the store. It’s a way to drive light and moderate users into the committed category,” he said.

While value is always important, Batcha maintains it’s not all about price. “I think there is a lot you can do to bake price into value rather than to try to drive price out to convert light users into heavy users. Consumers understand it’s not easy to be organic. If you tell your story it will help you hold your price in the marketplace,” she said.