Jim grew up in the area in the 1960s with a “back to the land” philosophy but didn’t immediately start working in the family business.  “I first got involved in agriculture when I was living in the Pacific Islands in the 1970s,” he said, noting that his curiosity was piqued and he had a natural inclination to learn all he could. 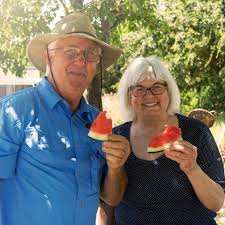 The seeds of an agricultural career were planted, and he did come back to the region in which he grew up and started farming a piece of property that was in the family holdings with his brother.  Soon thereafter, he split off, bought his own land and he and his wife and business partner, Deborah Durst, planted their first crop of organic processing tomatoes for the Muir Glen label in 1988.  They soon expanded the operation growing a range of organic crops including alfalfa, sunflowers, sugar beets, and grain. By the following year, they had jumped into the fresh organic market with tomatoes and mixed melons.

Thirty years later, they are still going strong as Durst Organic Growers producing crops under the Hungry Hollow label.  Located only about 80 miles north of San Francisco and its progressive food movement that is a key market for the firm.  But they also have a nationwide following, selling most of their output through Organic Harvest Network, a Richmond, CA-based organic wholesaler, coincidentally established the same year the Durst launched their organic farm, by Giuseppe Salvato. 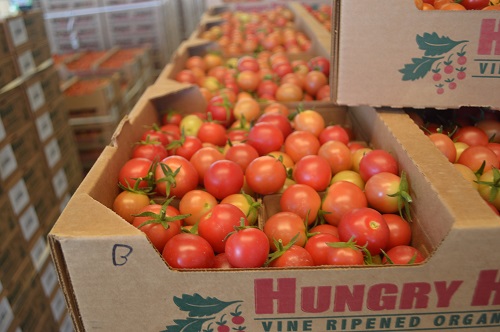 Today, Durst Organic Growers produces crops on 900 acres with artisan cherry tomatoes, heirloom tomatoes, asparagus, winter squash, watermelons and mixed melons being its fresh market mainstays.  It is a year-round growing operation that harvests marketable fresh organic produce nine to 10 months of the year. Its asparagus crop comes on in the spring, while the summer is devoted to melons and tomatoes and the fall and winter produce most of the hard-shell squashes.

In producing their crops, the Dursts strive for what they believe is the differentiator…”taste.”  Jim is fond of saying, “If it doesn’t taste good, what’s the point.”

A tour of their field in the three-mile-wide by five-mile-long Hungry Hollow Valley in which their crops are produced, includes stops along the way to taste the tomatoes and the many melons, which prove that he has achieved his differentiator.

At this time of the year, those two crops are featured.  The Dursts have about 150 acres of artisan cherry tomatoes with the mature fields picked every three days to assure a constant flow of flavor-bursting tomatoes in the 11 varieties that they produce.  That tomato deal dates back to the late ‘80s when Jim planted his first two acres of organic cherry tomatoes, producing a “huge amount” that was difficult to sell as organic production had not yet fully caught on. Currently the crop is in production from mid-June to mid-October with customers lining up to buy the output. 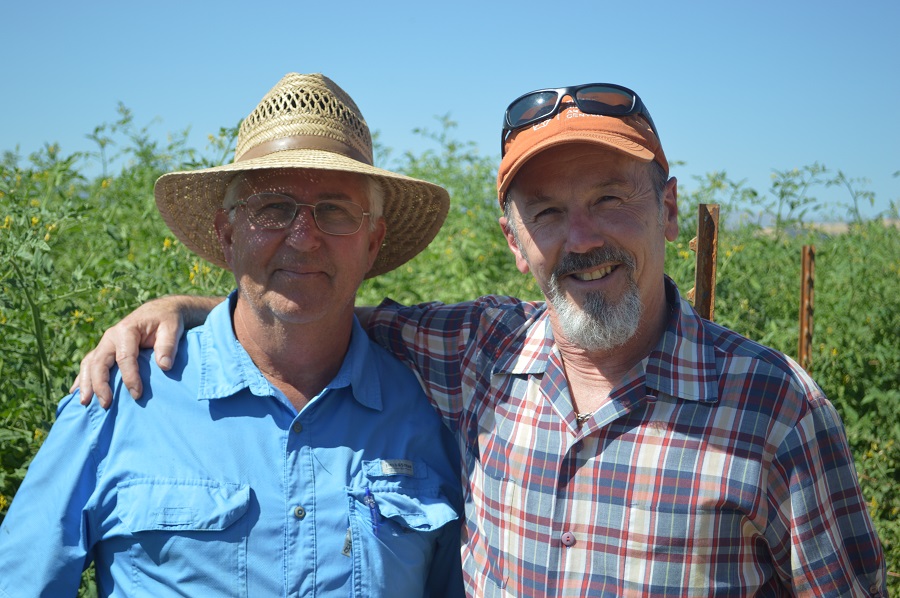 Peter Oszaczky, who has been with Organic Harvest Network for two decades and sells the Hungry Hollow production, calls himself “a big fan of Jim Durst and his family.” He marvels as he tastes the tomatoes and slices of the melon, exclaiming each one tastes better than the last, agreeing that the fantastic flavor is what drives demand for the product.  The cherry tomatoes are harvested, packed and in commerce with about 24 hours.  “We harvest to order,” Oszaczky said.  “I have orders in hand well ahead of time.”

Durst continued the theme as he discussed the organic greenhouse tomatoes that he often competes against.

“Greenhouse tomatoes don’t taste good,” he said, clearly revealing where he stands with regard to using soil to create organic crops.

The soil is all important he says, noting that it is constantly improving and claiming he is still learning how to farm his ground 30 years after planting his first crop.  The company sells its cherry tomatoes in a fully recyclable container, another advantage that fits into the company philosophy while satisfying the demands of its customers.

Durst doesn’t hesitate at all when declaring that he and his wife got into the organic produce business as a philosophy rather than a marketing ploy.  He does appreciate that the bigger players have gotten into the business producing more organic fruits and vegetables and exposing more consumers to this important production sector.  But he has no plans to expand his operation beyond its family farm status.

“We don’t want to get big,” he said.  “Our focus is on getting better at what we do…the healthier the soil, the better crops we produce.”

He takes pride in knowing that there is a trend toward taking better care of the soil with conventional growers also adopting better farming practices.