By the Numbers: A Look at Organic Agriculture in the 2017 Census of Agriculture

After surveying nearly three million farms and ranches across the country, the USDA’s National Agricultural Statistics Service (NASS) recently released the 2017 Census of Agriculture results, which showed an increase in the consolidation of farms, and an overall decline in the number of farms and farmland.

Organic agriculture, however, emerged as a shining light, showing growth and vitality, as well as outstanding opportunities for younger farmers. 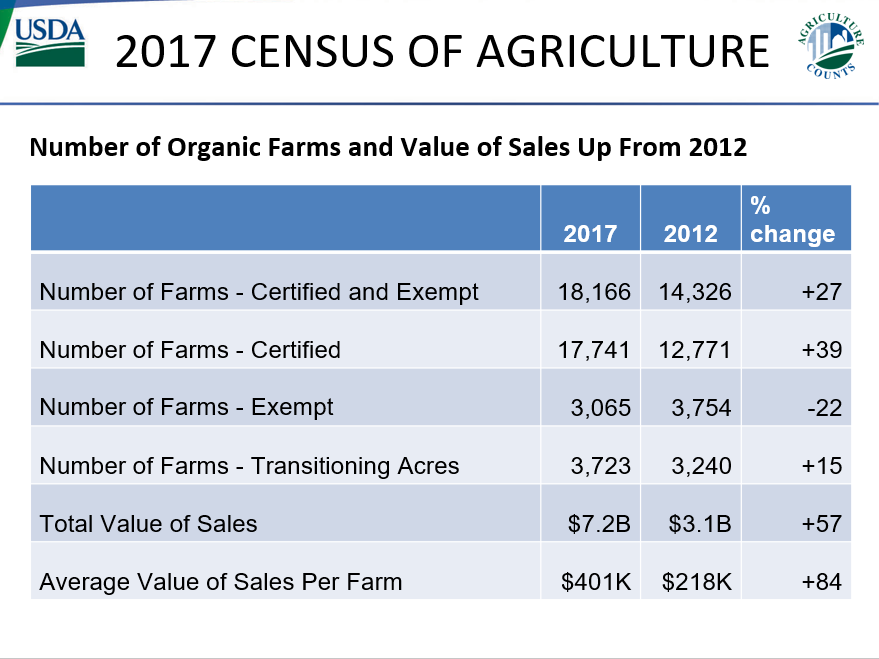 In total, the Census of Agriculture counted 18,166 organic farms (certified and exempt) in 2017, a 27 percent increase from the 14,326 organic farms in 2012.  Additionally, the number of farms transitioning acres for organic production rose 15 percent from five years ago to 3,723.

The NASS conducts the census every five years, looking at land use and ownership, operator characteristics, production practices, income, and expenditures.  Small plots of land – whether rural or urban – with a value of $1,000 or more of agricultural products produced and sold during the year are included in the census.

Collecting this data is important because it guides most federal farm programs, policies, and funding decisions, while influencing decisions that will shape the future of U.S. agriculture.

Adam Cline, NASS Census and Survey Division section head, stressed the importance of the Census of Agriculture.  “The census provides the only source of impartial, consistent, and comparable data for every county and state in the nation,” he said. 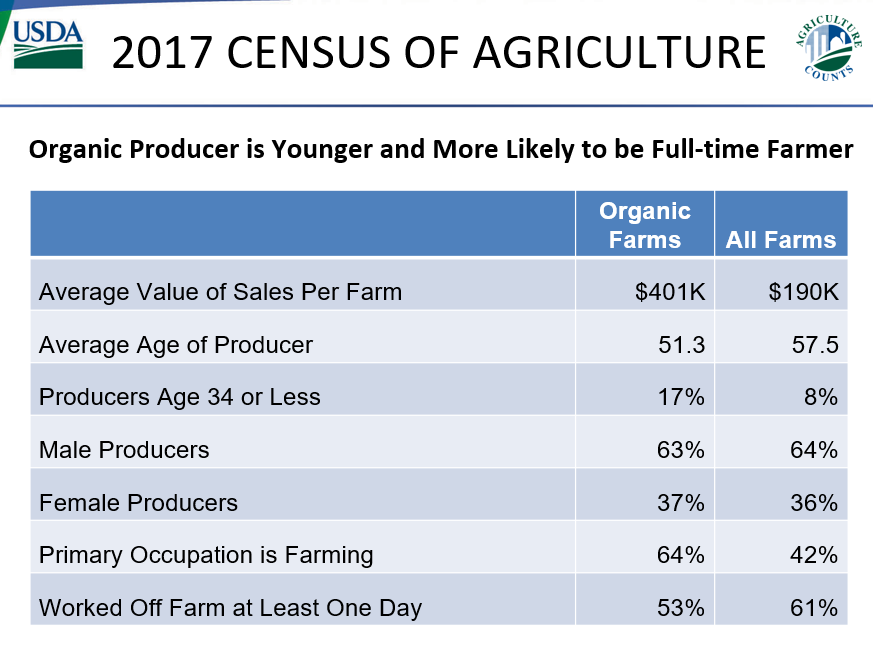 NASS is getting ready to conduct the 2019 Organic Survey as a special study to the 2017 Census of Agriculture.  This will be the sixth comprehensive organic survey NASS has conducted and will provide fresh insight since the last organic survey conducted in 2016.

Look for the 2019 Organic Survey to be mailed to organic producers in December 2019. The survey can be completed by mail or online at www.agcounts.usda.gov.

The results of this survey will be available in Fall 2020 in aggregate form, ensuring that no individual operation or producer can be identified.

Cline stressed the importance of farmer participation, “Response is critical to help inform program and policy decisions, such as developing more accurate and more widely available crop insurance coverage for organic commodities. The data also help farmers identify areas where there is room for growth on their own operations. “

Following a rough start to the organic Mexican mango season, production in northern producing regions continues to build with improving quality fruit that should lead to promotional opportunities for suppliers and retailers.

Bonduelle Fresh Americas was founded in the summer of 1969 as Ready Pac Foods, and for 50 years has been a leader in offering the most innovative fresh food products to consumers in the Americas.

2. Farmers Look to ‘Creative’ Solutions to Maintain Their Livelihood

3. Organic Farming Has a Plastic Problem

By the Numbers: A Look at Organic Agriculture in the 2017 Census of Agriculture