Whisky Hill Farms and Blume Distillation is the brainchild of David Blume. Part magnanimous farmer and part mad scientist, Blume has designed a complete farm ecosystem combining his advanced bio refinery systems with holistic organic farming. He is also recognized as growing the largest crop of domestic certified organic turmeric in the US.

It is, however, Blume’s high-grade alcohol that is produced from waste products from the food system that is most fascinating. This year it became illegal for food waste to go into the landfills in California. While there is a two-year grace period, several counties in the state have already banned food processors from taking their waste to the dump.

“I’ve been talking to landfill operators and we think that’s the perfect place to put up alcohol plants and process that food that’s coming in. “Blume said. “It requires water to process the garbage in the landfill so after we take out all the carbohydrates and sugars from distillation we have water left over. You can spray that excess water on the landfill and it costs nothing.

We are talking to counties around the state to help them deal with this very valuable waste. It’s a problem and we can turn it into a solution for counties by providing fuel for their vehicles.” 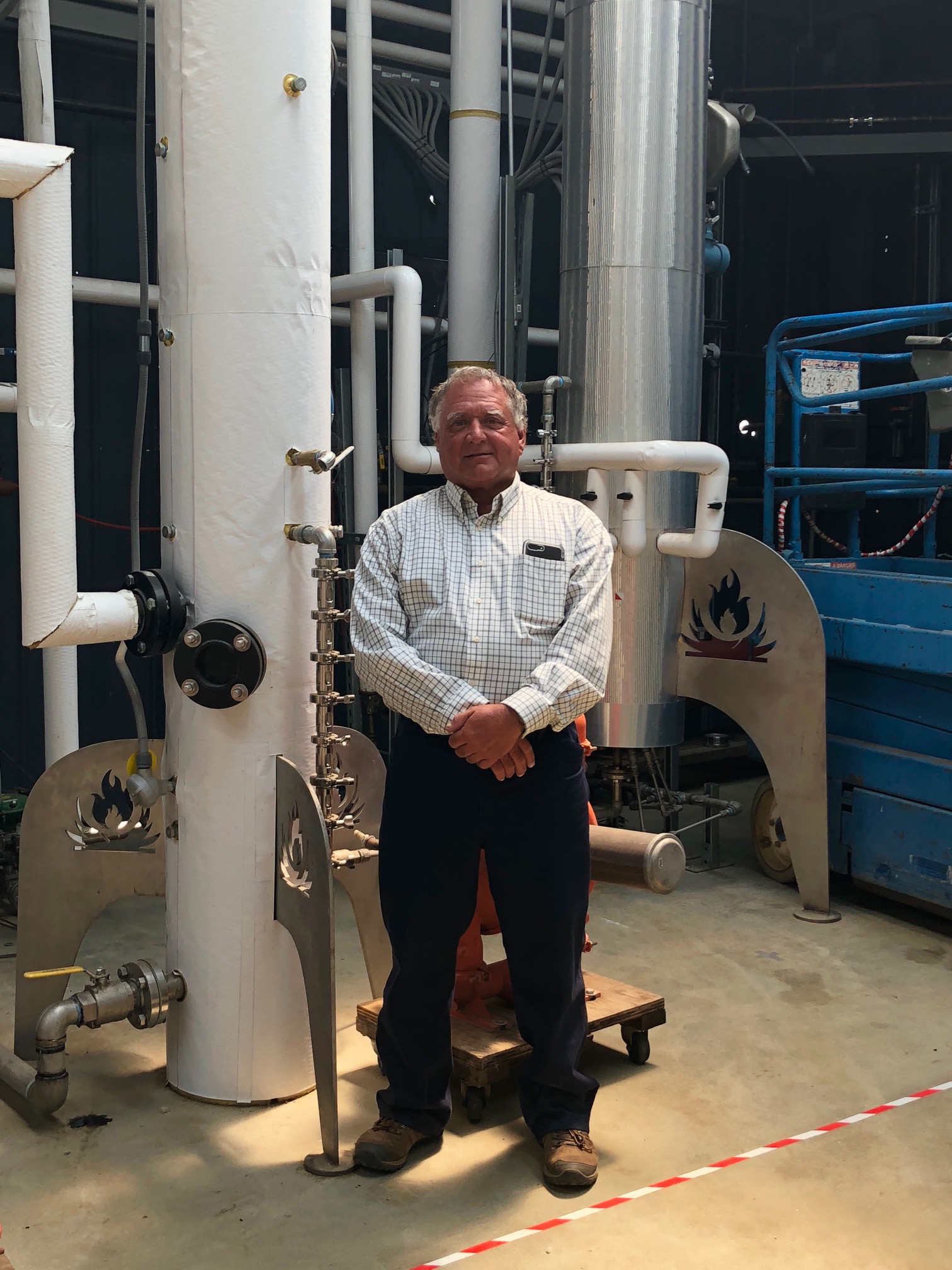 The end result is 200 proof alcohol that is immediately suitable for clean burning fuel.

“Almost all of the herbs that are cultivated are also used in tinctures or extracts. In fact, half of all western medicines that we take in pill form originally came from plants whose active ingredients were extracted with alcohol, “Blume said. “If you extract the leaves of willow with alcohol and then evaporate the alcohol the powder that’s left is aspirin.

They do things differently at Whiskey Hill, and one has to look no further than a pile of compost to see why. The inside of a pile of compost is full of CO2, with bacteria have gone to sleep. Normally a farmer would take a tractor and make a new pile, filling it up with oxygen.

Instead Blume lays a tube with spray emitters through the length of the compost pile. The compressed oxygen captured from the alcohol distillery is gently pushed throughout the pile. The oxygen pushes the carbon dioxide out just like turning the pile, but without all the work. “I’m kind of allergic to extra work” David said.

At the same time, different solid tubes run through the pile filled with water. As the compost heats, the water is pumped out to the greenhouse where it’s diverted to pipes under the surface of the soil. This, in turn, heats the soil and the tropical plants pulling up the warm water and heat themselves internally.

Blume said he never has to heat the greenhouses and saves 90 percent of the energy normally used to operate a greenhouse. 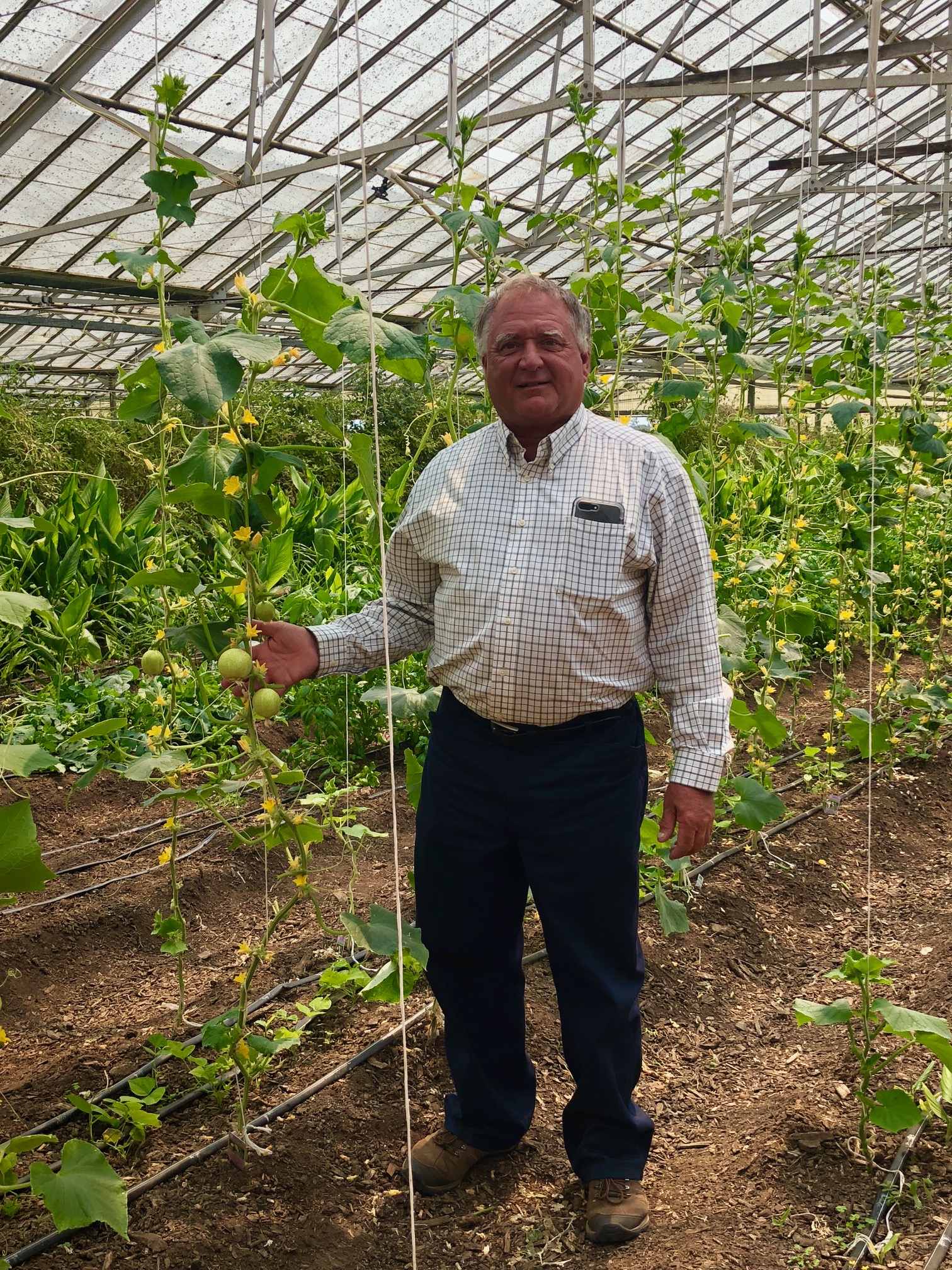 David Blume in one of the fully organic, and CCOF certified organic greenhouses.

The rest of Blume’s 14 acre facility is filled with a variety of different---and unrelated--- organic products. One can sample papalo leaves, a delicacy from Oaxaca, or walk among rows of organic lemon cucumber, watermelon, habanero peppers, ginger, eggplant, and jicama.

Organic turmeric, however, is Blume’s prize plant. And ever the scientist, Blume points to turmeric he has planted side by side----yet markedly different in size, with one three times the size of the other... The reason:  The larger one has taken shots of CO2 during the day - a byproduct of the distillery.  And this year, Blume plans to triple his organic turmeric offering through his advances in growing technology.

Leftover nitrate rich water, for example, goes into a series of ponds that grow cattails rich in protein and algae that produces oxygen, that in turn feeds fish ponds. Next year he plans to grow fresh water lobster in the ponds, that some say taste better than saltwater lobster and producing a new crop every three months.

Blume asks, “For every gallon of alcohol I make in the plant, I get $40 worth of lobster right here. The question becomes, where am I making the most money, lobster or alcohol?”