Linda Fritz, a former automotive engineer, is an unlikely organic farmer as she claims she doesn’t like vegetables. After tasting edamame in a restaurant and then sun sugar cherry tomatoes, she decided to start growing them. From this sprouted Sun Sugar Farms, with a passion for sustainability guiding her business.

“I thought if I grew these two items on a larger scale, maybe more kids would like vegetables and eat healthier since it was working for me,” she said.

In addition to organic, sustainable practices, Fritz became a distributor for several eco-friendly products and eventually invented an alternative to grocery bags, the CRESBI Crate. Recently she wanted to stop using plastic clamshells to package her cherry tomatoes, and searched the agricultural industry for a biodegradable box that suited her needs. After a fruitless quest, Fritz decided to create a new lidded cardboard box, with whimsical shaped holes for airflow. 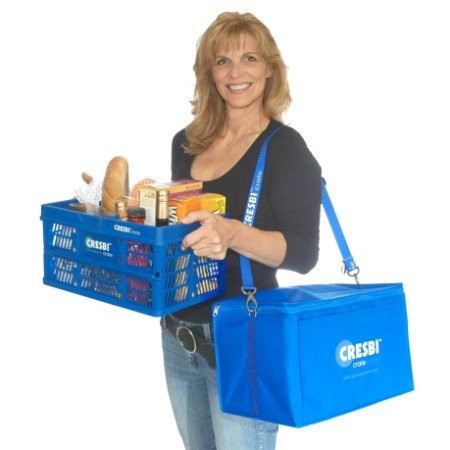 “I tried to incorporate all the elements on the container that go into creating the produce: the sun, rain, plants, wind, heavens (please God let there be a good harvest) and even the earthworms’” she said.

After being rejected by several skeptical paper companies, she finally found one that would work with her, and in April 2018 produced a practical, pint-sized container. It is structurally stronger than a plastic box allowing more weight to be stacked on top. There are two ways to quickly lock the lid closed or reseal it after opening, and the lid has a space for a sticker. The initial run was on white paperboard with print for marketing; moving forward the pints and also quart sized boxes will be made of brown Kraftpak. Temporarily, Fritz is calling her invention “the Sustainable Produce Container,” or for short, “A Better Box.”

In addition to being recyclable and compostable, the container may improve shelf life. Fritz said, “I did numerous tests in my own refrigerator and found that produce kept as well or better in my container as in plastic, even over several weeks. If I did have any leaky berries the paper absorbed it versus the juice pooling in the base of a plastic container.”

The pint boxes are ideal for smaller tomatoes, raspberries, blackberries and average-sized blueberries. Fritz said she is getting orders from customers who intend to package microgreens, figs and even soaps.

To gauge the market, Fritz conducted two customer surveys. At a local Agricultural Fair she presented her new box to 90 organic-minded people in comparison to a similar product from a major distributor they chose her design two to one. The second test was at a farm tour in Kentucky where customers chose her box eight to one. Linda feels that her design provides more protection and ventilation. Additionally the orders ship with boxes laid flat, saving space, and assembly is easy.

For the smaller farmer this container option may be ideal because they can order small quantities. It is currently offered in a trial 25 pack, 100 and 200 packs, and up to pallets quantities. When asked about costs, Fritz said “It's actually not much more than plastic: a low profile pint in plastic costs around $0.12 for a minimum of 200, with additional shipping costs.  Our shipping is less because we ship flat.” Fritz plans to market to smaller farms at agricultural shows to lower costs and avoid shipping. Looking forward, she hopes to reach more farmers through a green distributor and for larger producers would like to find a robot to assemble the containers.

“As more growers start using the Sustainable Produce Containers I can have higher quantities made and pass on even better pricing that actually beats plastic,” she said.  “The mission at Sun Sugar Farms is to provide wholesome, quality products, fairly priced while showing respect for the earth and operating as sustainably as possible. One third of what's in landfills is simply packaging. Hopefully, the Sustainable Produce Container will help cut down on some of that waste and make a better world.”

Bounding on to the stage at the third annual Organic Produce Summit in Monterey, California, Geoff White, President of Albertson’s Own Brands, including the bestselling O Organic brand, called out to the thousand-plus audience members, “How does it feel to be part of the fastest growing segment in the grocery business?”

A pair of marketing experts took a deep dive into the trends, attitudes and motivations of the organic consumer and brought their data driven research to one of six educational sessions at the Organic Produce Summit.