The Original Pioneer in Organic Micro-Greens

Organic Microgreens have become a trendy item with several larger commercial operations around the country and many “garage farmers” using a little space in their urban environments to grow these baby crops that are chock full of flavor and nutrients and prized by top end chefs.

Kurt Rasmussen is 79 years old and claims he doesn’t want to work as hard as he once did.  So his wife Edinalva (Didi) Rasmussen now manages all the production, food safety, labor and shipping needs associated with Ya-Whooo Organic Gardens, a Vacaville, CA, company that specializes in organic microgreens. 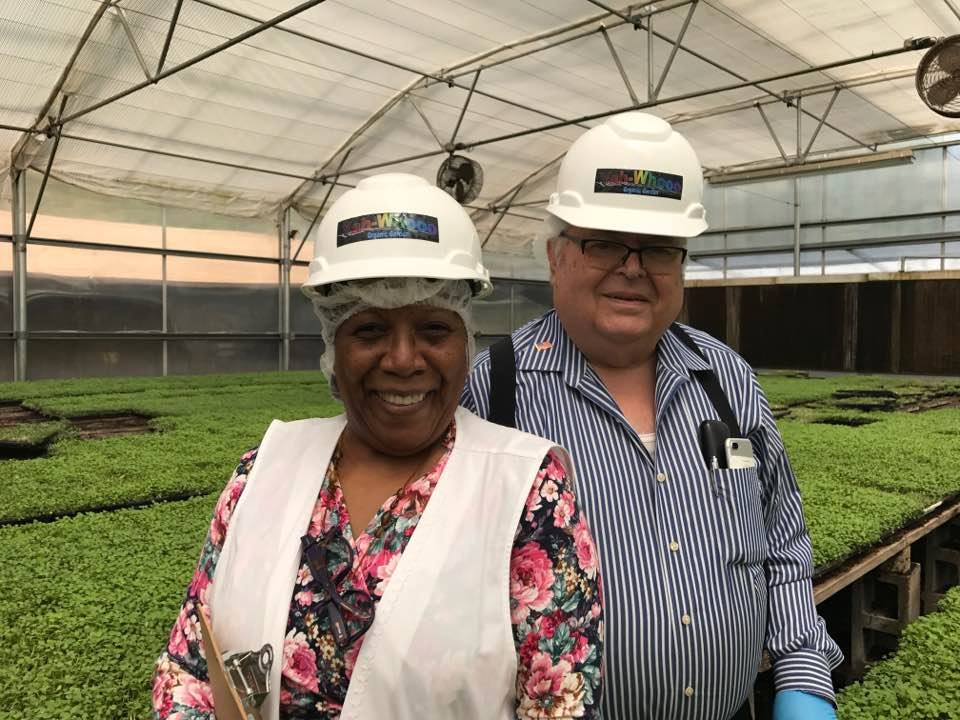 “Kurt does the selling and manages the finances and I do everything else,” says Didi.

While many have entered the business in the last couple of years, Kurt claims to be one of the original pioneers starting his company in 1986, becoming fully certified organic in 1989 and perfecting his microgreen growing techniques in the 1990s.  He’s been at it ever since and has taught many others the profession along the way.

He points to one unnamed San Diego protégé that is currently producing dozens of varieties and selling them on a large scale.  Kurt said he is too old for that and prefers to carve out a living on a much smaller scale, which includes 25,000 square feet of space on five acres in Vacaville, which features a suburban/rural crossover.  Some of the production is greenhouse grown and some is grown in the open. 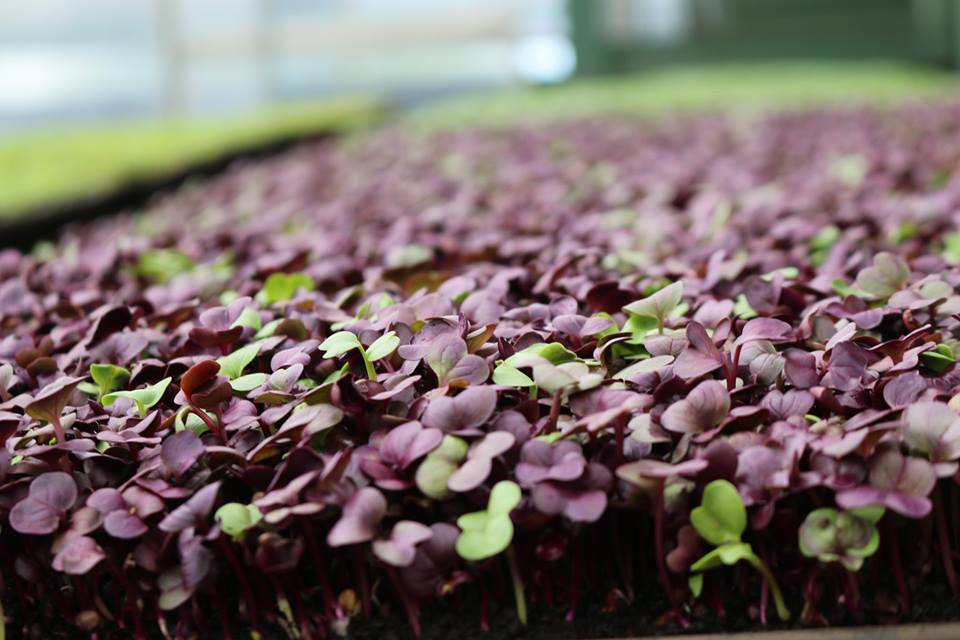 Kurt explained that micro greens are a tiny form of young edible greens produced from almost any vegetable or herb seed. They range in size from 1″ to 1 ½” long, including the stem and leaves, and are the first couple of leaves after germination.  Typically, within about a week, a seed produces two fully developed cotyledon leaves and usually one pair of very small, partially developed true leaves. Kurt began experimenting with which microgreen leaves makes the best product in the 1990s, well before others had considered the commercial viability of the crop.

From day one, Kurt’s microgreens have been certified organic, which is not the easiest crop to grow organically.  He notes that microgreens must be treated very carefully and correctly to avoid any food safety issues.  Again it is Didi who has taken on that role as guardian of the crop and achieved all the certifications necessary to make sure the entire operation is in compliance with all regulations.

Yah-Whooo Organic Gardens is now concentrating on about 17 different varieties, some of which are seasonal.  “Our biggest seller is a Rainbow Mix,” said Didi, encouraging interested parties to go to the company’s Facebook page and check out its microgreens lineup.  “I manage the Facebook page and all the photos.” 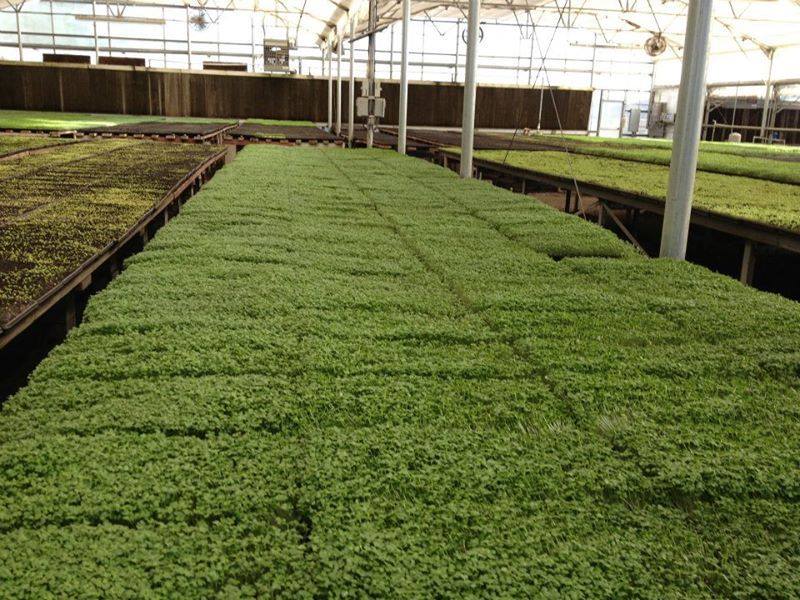 Among its products are wasabi, tatzoi, red cabbage, radish, cilantro, arugula and mizuna.  “Most of the time we can’t keep up with demand,” she said.

The company also has a website (yah-whoooorganicgardens.com), but Didi said it is through Facebook that the company connects with most of  customers.  Ya-Whoo utilizes foodservice distributors in the San Francisco Bay Area to distribute most of its production but it also works with several East Coast distributors, delivering product back via UPS three times per week. It also sells some of its output through retailers, with Berkeley Bowl in Berkeley, CA (featured in an earlier OPN Connect) being its top supermarket customer.

One might wonder what Yahoo!, the giant web services provider thinks of a small microgreens company stealing its name.  But it’s actually the other way around.  “I came up with the name five years before they did,” Kurt said.

He explained that when he launched his company, which was originally a grower of normal sized organic vegetables and herbs, he needed a catchy name.  He thought “yahoo” sounded good and decided to spell it uniquely for no specific reason. Thus Yah-Whooo Organic Gardens was born.

Fresh produce leaders from three of the nations’ largest and most recognized grocery operations have been confirmed as panelists for the Retailer Roundtable at the third annual The Organic Produce Summit, on July 11-12 in Monterey, CA.

Covilli Brand Organics is continuing their cooperative approach to sustainable agricultural programs by partnering with an association of citrus growers of Sonora, Mexico. This partnership has the means to make substantial positive impact on growers, communities and organic standards throughout Mexico, while offering consumers safe, socially and environmentally responsible organic citrus choices.

Before there were USDA organic regulations, the state of California passed its own organic regulations in 1990. Today, California is the only state in the nation with its own State Organic Program (SOP) that provides enforcement and regulatory activities within the State; much like the National Organic Program (NOP) does for the rest of the country.

Where are U.S. organic operations concentrated?

The Organic Coup Will Add Ingredient Labels To Their Packaging, Providing Up-Front Information About Their Food To Customers

The Original Pioneer in Organic Micro-Greens

Where are U.S. organic operations concentrated?

The Organic Coup Will Add Ingredient Labels To Their Packaging, Providing Up-Front Information About Their Food To Customers