A packed audience listened to a pair of Organic Produce Summit educational sessions exploring the growth of controlled environment agriculture (CEA) and the effort to continue to allow CEA crops to qualify for organic certification under USDA’s National Organic Program (NOP). 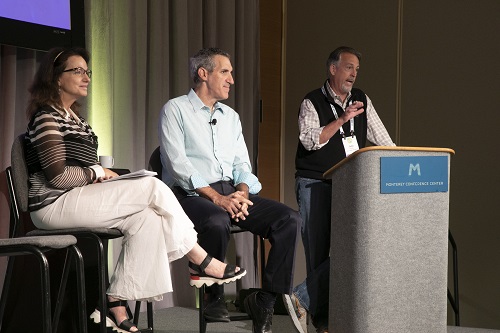 Produce industry veteran Todd Linsky, host of the podcast Todd-versations, moderated both seminars with industry experts bringing the industry up to date on indoor growing production techniques, which continue to elicit controversy. Linsky and the panelists for both sessions were clearly proponents of CEA farming, with two would-be anti-CEA panelists involved in a lawsuit aimed at stopping the certification of organic produce grown in any medium other than the ground. “If it’s not grown in the crust of the earth, it’s not organic,” he said, in summarizing the lawsuit, which is currently in the appeals process. 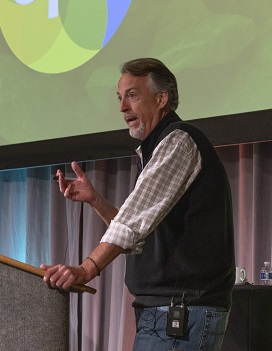 The case for the continuation of organic certification for CEA farming was made by Lee Frankel, executive director of the Coalition for Sustainable Organics, and Karen Archipley, co-CEO of Archi’s Institute for Sustainable Agriculture. Frankel said that if the lawsuit is successful, it would revoke organic certification of many CEA products, listing container farming as a “prohibited practice” under NOP regulations.

The association executive, whose members are largely CEA operations, frames the issue as a battle against innovation. “We want to make sure organic systems remain open to innovation,” Frankel said. 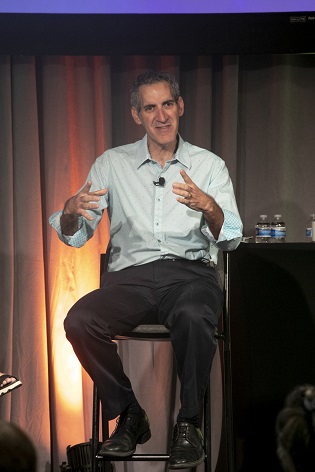 Frankel said that CEA farming, including hydroponics, vertical farming, and other modern techniques, has been deemed certifiable by the National Organic Standards Board and government regulators since the NOP regulations were first written. While the ability to grow organically in various mediums was not considered viable 30 years ago, NOP regulations over the years have confirmed and reconfirmed that if new techniques meet the regulations in every other way, they qualify for certification.

“We want to make sure organic systems remain open to innovation.” -Lee Frankel

Frankel noted that many crops—including tomatoes, cucumbers, bell peppers, mushrooms, sprouts, and living herbs—see a substantial percentage, if not the majority of their organic production come from CEA farms. In addition, many other crops are moving in that direction. He believes CEA is leading the charge in organic innovation, and any effort that curtails that progress will result in less production and higher retail prices for the category. 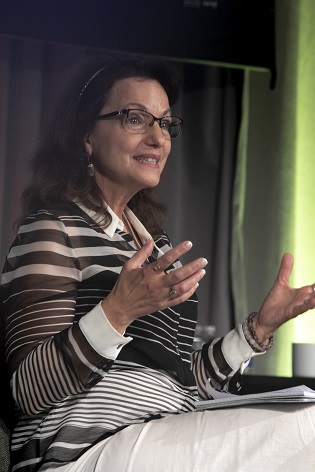 Archipley agreed, noting that if the lawsuit were successful, organic production would decrease. “We want to live in a world where organics is the norm,” she said.

Karen and her military veteran husband, Colin Archipley, started Archi’s Acres in Escondido, CA, more than 15 years ago with the dual goals of creating an organic hydroponic farm and providing entrepreneur opportunities for veterans in sustainable agriculture. Karen continually decried that this farming technique has become controversial, and it is dividing the organic community. She clearly believes the industry should come together and embrace all organic efforts to increase production, lower the retail cost, and bring the benefits of organic produce to more people.

“We want to live in a world where organics is the norm.” -Karen Archipley

It was this concept of increasing the supply of organic produce that dominated the second CEA session, CEA of Tomorrow: From the Greenhouse to the Consumer. The panel featured two suppliers and one retailer, each of whom discussed the significant role CEA is playing in the organic produce sphere, and the bright future it has. 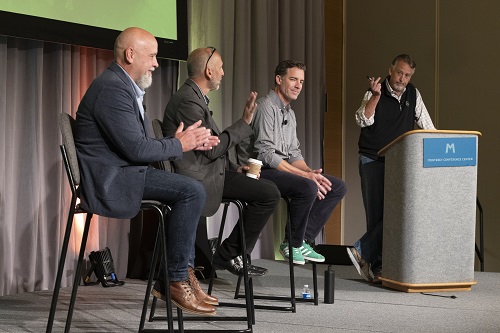 Steve Wright, chief customer officer at Virginia-based Soli Organic (formerly Shenandoah Growers), noted the company changed its name to more accurately represent its transition to 100 percent organic production. Organic is very important to the company, he said, and it is laser focused on providing flavorful and affordable organic produce to consumers. During the course of the session, Wright discussed some of the innovative practices Soli Organic has adopted to reach that goal, including growing the product in a proprietary soil process that features its own farm-made nitrogen. 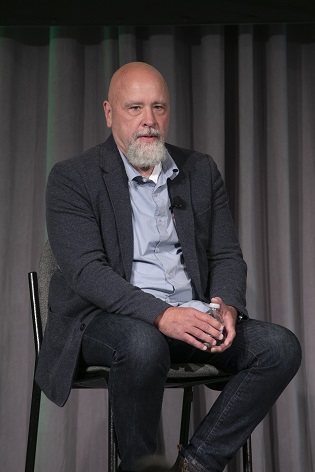 Soli Organic is a leading producer of leafy greens, living herbs, and basil. Wright gave a loud endorsement of the benefits of CEA farming, noting that “We are at the crossroads … We have to manufacture food in a more efficient way.” Reiterating that flavor is a key component of the company’s value proposition, he said CEA offers the ability to give consumers a more consistent product that checks that box.

The other supplier on the dais was Brendon Krieg, co-founder of Revol Greens, one of the nation’s largest greenhouse lettuce producers with facilities in Minnesota, California, and Texas. The company is currently transitioning an increasing amount of its production to certified organic as Krieg said that growing process aligns with the company’s core values. When its current Texas greenhouse project is completed, he noted 70 percent of the production will be organic.

“We are at the crossroads … We have to manufacture food in a more efficient way.” -Steve Wright

Revol Greens also claims to be an innovator as it is using organic nutrients that are 100 percent plant based to grow its stable of lettuce SKUs. Staying with that innovation theme, Kreig said CEA techniques use less water, less land, and less labor to produce a greater volume of product. He said to continue to grow and survive, farmers must use the planet’s limited resources in a more efficient way. 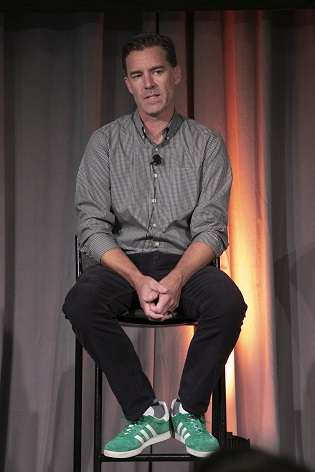 The panelists agreed that not all products can be grown indoors, but there are opportunities for many more items than are currently following that path.

The final panelist, Andrew McGregor, vice president of produce and floral sales merchandising for Sprouts Farmers Market, is also a supporter of indoor farming, noting that “we have to be advocates of the technology that is right for our planet and our food.” 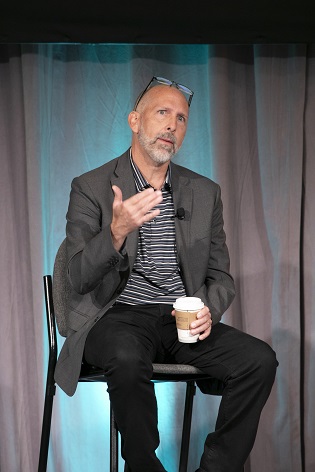 The story of indoor farming—and the benefits it brings—has to be presented to consumers in a more compelling fashion, McGregor said. He indicated that both suppliers and retailers must sacrifice profits to tip the scales in favor of this more environmentally friendly technique, which includes the organic option.

“We have to be advocates of the technology that is right for our planet and our food.” -Andrew McGregor

McGregor argues that the concept works well in today’s shopping environment as customers are more knowledgeable about their food and want to know even more. And they want their food produced in more sustainable ways, with suppliers and retailers working together to devote more space in the store for CEA products and for telling the CEA story. 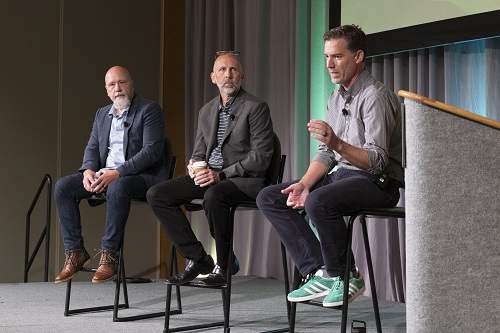 McGregor reasoned that product sold on display tables has sufficient real estate to tell that story but noted it is more difficult when dealing with product such as organic lettuces and value-added products, which are merchandised in smaller, more-defined sets.

“We have to invest in more space and promotions,” he said, making it clear he was talking about both the producer and the retailer.

Connecting with consumers in an era of inflation, the rise of omnichannel marketing, and the future of supply chain sustainability were among the hot button issues explored at the sixth annual Organic Produce Summit, held last week in Monterey, CA.

At an OPS 2022 ed session on regenerative ag, leadership from three large-scale specialty crop growers discussed their involvement with regenerative production, including the challenges, future outlook, and how the retail community can manage and market regeneratively grown organic products to the consumer.

Last week, 1,700 OPS attendees gathered together in Monterey, CA, to celebrate the organic fresh produce industry. From engaging retailer tours and informative educational sessions to inspiring keynote presentations and a trade show exhibition featuring over 150 organic produce growers, shippers, and processors, OPS 2022 had something for everyone.