The organic pear crop from Argentina is still being sold from inventory in the US market, but supplies are quickly winding down, and it is anticipated that there could be a short gap until domestic supplies ramp up.

“The import pear deal from Argentina is wrapping up,” said Ben Johnson, President of Bridges Produce, located in Portland, OR, this week. “We are right at the tail end, but there should be enough volume for the next 10-14 days. It looks like we should have a smooth transition once we see some California Bartletts.” 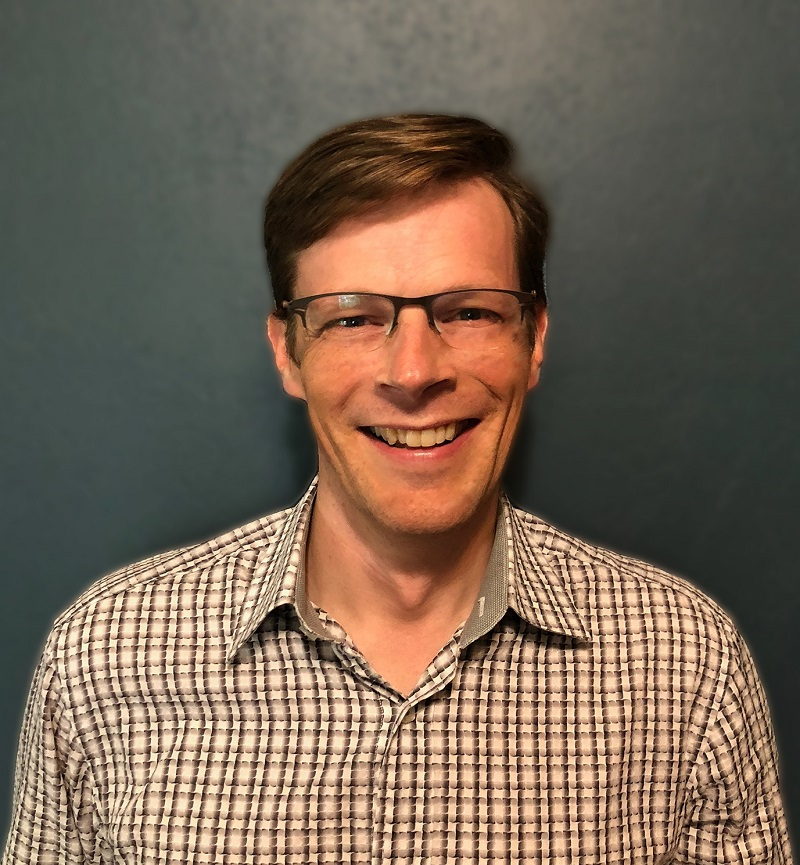 Matt Roberts, sales manager for Viva Tierra Organic in Mount Vernon, WA, concurred with that assessment, noting that Argentina’s organic Bosc and Autumn Bartletts were coming to the end of their seasons, and there could be a small gap before California starts picking.

“The import pear deal from Argentina is wrapping up. We are right at the tail end, but there should be enough volume for the next 10-14 days.” - Ben Johnson

“We are expecting to start with organic California Bartletts on July 11. It looks like a good-size crop with more organic production this year. Organic Bosc pears are expected to start in early August,” Roberts said.

The big unknown this year is when Oregon‘s Hood River will get started with its new season supply of organic pears. “We had a cool wet spring [in the Northwest]. We aren’t expecting anything until early August,” Roberts said. 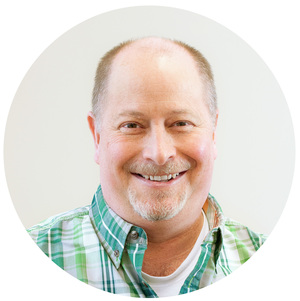 The Viva Tierra executive noted that because of the later start in the Pacific Northwest, “there should be a nice window for the Lake County [California] organic Bartletts.” With costs of everything increasing and the Lake County organic deal expected to have limited competition as it hits the market, FOB prices should be up. “This would be the right year to do it,” he quipped.

“We are expecting to start with organic California Bartletts on July 11. It looks like a good-size crop with more organic production this year.” - Matt Roberts 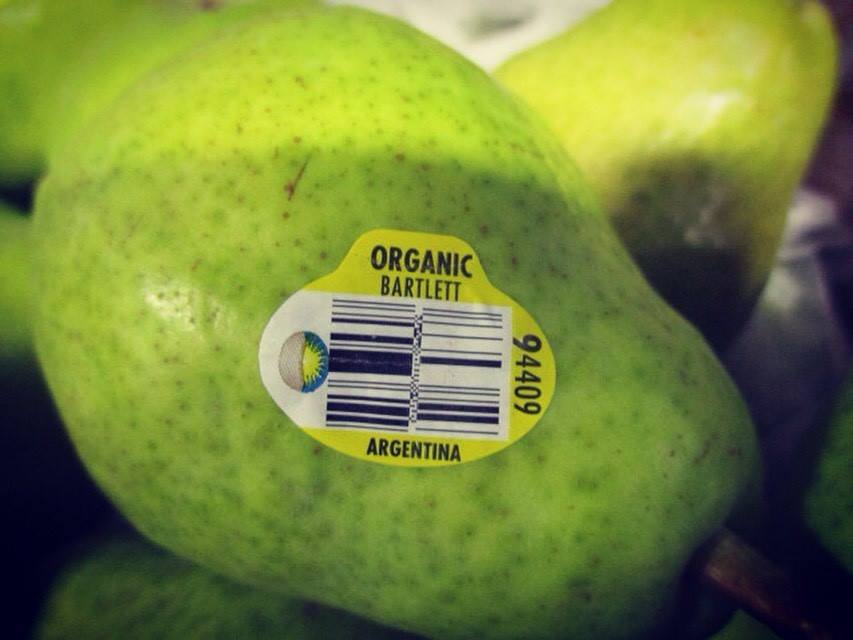 Further explaining the timing and volume of the California crop was Kyle Persky, sales manager of Rivermaid Trading Company in Lodi, CA, one of the larger California pear shippers. “We will start with organic Bartletts the week of July 11,” he said, noting that the organic volume will represent about 10 percent of the California crop. “The percentage of our crop that is organic increases a little bit every year.” 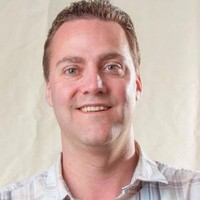 Persky said overall, California’s organic pear volume should be similar to last year, although total pear tonnage appears to be down a bit this season. Rivermaid should have organic Bosc and Bartletts into September, and while the market for organic pears should open with a strong FOB, there will also be promotable opportunities. “We have a two-pound stand-up pouch, and we also have the more traditional three-pound poly bag in organics,” he said. “Either one makes a nice presentation.” 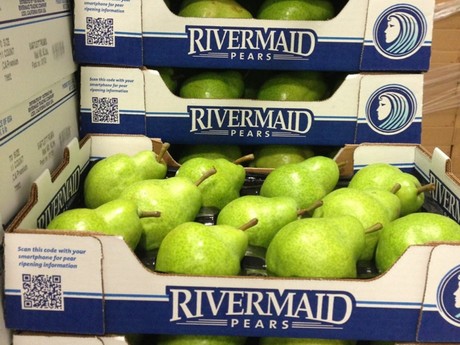 “The percentage of our crop that is organic increases a little bit every year.” - Kyle Persky

Johnson noted that it was just about one year ago that the Pacific Northwest was hit with a record-setting heat event that saw temperatures climb above 110 degrees. “That prevented the fruit from sizing up,” he said. “As a result, we had a smaller size portfolio. We haven’t had that heat this year, but we did have snow during bloom. We’ll have to wait and see how that plays out.”

Bridges Produce will have a full assortment of Pacific Northwest (PNW) organic pears throughout the season as the harvest of the red Starkrimson variety will be followed by many other varieties, including Bartlett, Red Bartlett, Autumn Bartlett, Bosc, Comice, Red Anjou, and Green Anjou. 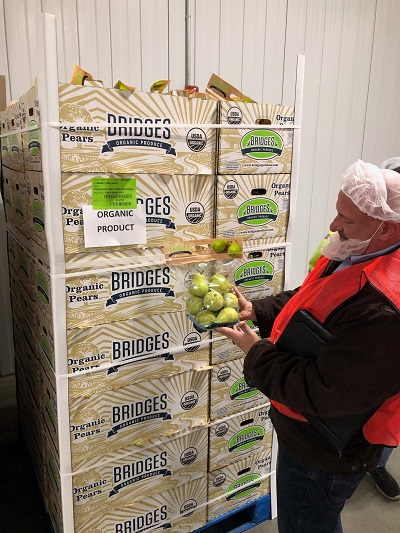 Pears are harvested in the summer and fall and then sold from storage throughout the rest of the year—at least that is the case for conventional pears from the PNW. The organic pear volume does not typically last into summer.

Jim Morris, marketing and communications manager for Pear Bureau Northwest, a commodity board for Oregon and Washington pears, told OPN Connect that though about 7 percent of the total crop remains to be marketed in July and beyond, there are no organic pears remaining in storage.

“The next pears for Bridges Produce will be organic Starkrimson between August 15 and August 30 from Hood River.” - Ben Johnson

Though an official estimate has not yet been released from the Pear Bureau concerning the 2022-2023 crop, Morris said “growers are cautiously optimistic” about the size of the crop this year. He noted that in each of the last two years, the total crop was above the four-year average and growers are hopeful for similar numbers this year. That would mean a packout in the neighborhood of 16 million cartons, with close to 10 percent of the production being organic.

If all goes according to plan, California State University at Monterey Bay (CSUMB) will be offering a new degree path—the Agribusiness Supply Chain Management Program with a focus on Perishable Products—by the Fall 2025 term. It will be the first degree program of its kind in the country to focus exclusively on fresh produce.

Stout Industrial Technology collaborates directly with its customers to build and launch solutions that solve actual problems in the field, particularly in areas such as labor and sustainability. Looking ahead five years, Stout’s CEO Brent Shedd sees the company playing a leadership role in the application of AI in agriculture, with more software-defined implements that have even greater capabilities.

3. Side Delights Showcasing Organic Potatoes and Onions at OPS