Advertising has long been considered a way to lead businesses to success, with print, television, and radio ads fueling consumer spending, which, in turn, stimulates economic growth.

Supermarket advertising is an essential tactic used to drive consumers to purchase products. It is a unique fishhook, with various items and prices used as bait to capture customers.

How do supermarkets advertise organic produce? How many items do they offer promotions on each week? Does the competition advertise more organics than you?

Many retailers are unable to clearly answer those questions because they rarely advertise organic produce, and some retailers never advertise.

Supermarket advertising is an essential tactic used to drive consumers to purchase products.

The purpose of sending flyer ads to consumers is to draw them into the stores with featured items at lower prices. Once inside, the strategy is to persuade customers to make purchases other than the ad items through skilled merchandising, ultimately allowing for a larger profit mix. Part of that profit is generated from organic produce purchases. 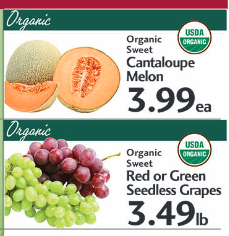 Shoppers must be lured to that organic section the same way they are lured to the conventional one—by advertising it. How many retailers support organic produce advertising? You may be surprised by the facts.

How do supermarkets advertise organic produce? How many items do they offer promotions on each week? Does the competition advertise more organics than you?

I examined weekly ad flyers of 20 grocery store retailers to identify the number of organic produce items that were advertised. Many of the ads included major corporate supermarket retailers, and the results were astounding. Organic produce had very little or no exposure in ad support.

Here is a summary of my examination of the weekly flyer ads of 20 different retailers:

This sampling reveals that most retailers fail to robustly promote organic produce in their ad program. It also contains a bit of fallacy by playing up to customers that a particular store competes with a large assortment of organic produce, but seldom offers them as ad specials.

What can be done to improve this situation? The best way to start would be with—a reachable goal. Your objective should involve the following:

What can be done to improve this situation? The best way to start would be with—a reachable goal.

Sixty percent of consumers say they would purchase organic produce if the prices were more economical—an outstanding reason to advertise additional organic produce in the weekly ad flyer. Since ad items are generally lower priced, it can be an ideal way to convey a message that organic produce is more cost-effective and affordable.

The bottom line:  Promote more organic produce in your ads on a consistent basis and watch sales grow.

With increased concerns over single-use plastic as well as a heightened awareness of the availability of more sustainable options, Yakima, WA-based Sage Fruit has been actively seeking alternative solutions to traditional packaging.

Several different varieties of organic tomatoes should be available in good volume in September, giving retailers plenty of promotional opportunities.

Cucumbers are a mainstay in the produce department, and recently they've been showing strong sales performance. Several industry players weigh in on the organic cucumber market.