Jeff Moyer is CEO of the Rodale Institute, a Pennsylvania-based nonprofit organization “dedicated to growing the organic movement through rigorous research, farmer training, and consumer education.” OPN recently caught up with Moyer to talk about his priorities for the Institute, Rodale’s current research efforts, the new Regenerative Organic Certification, and more.

Can you tell us about your background in organic farming?

I started at Rodale Institute in 1976 when I was 21 as a Farm Laborer. In 1982, I became the Farm Manager and then Farm Director, supervising our entire 333-acre operation, including the Farming Systems Trial, which at that point had just been established. Then in 2015, I became Executive Director and later CEO. 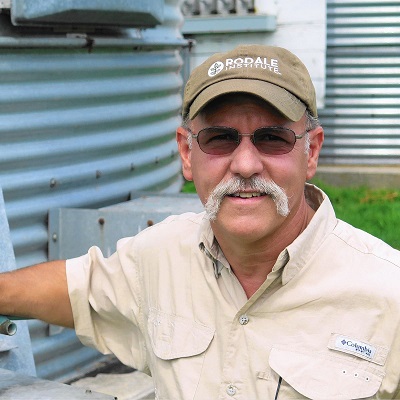 I’ve been fortunate enough to work with four generations of the Rodale family and really watch the Institute grow from a passion project to a world-renowned research organization. Along the way, I’ve been able to work on some innovative, game-changing research of my own—like the roller crimper that helps farmers grow organic crops without the need for annual tillage.

As CEO of Rodale, what are your priorities for the Institute?

I would say that my priorities now are nearly the same as they were when I became Executive Director six years ago—to grow more organic acres. It’s a goal that never really ends because despite all the amazing work that the Rodale Institute team and organic farmers all over have done, still only 1 percent of US cropland is organic. Until that number reaches 100 percent, I’m never going to stop focusing on transitioning land to organic. 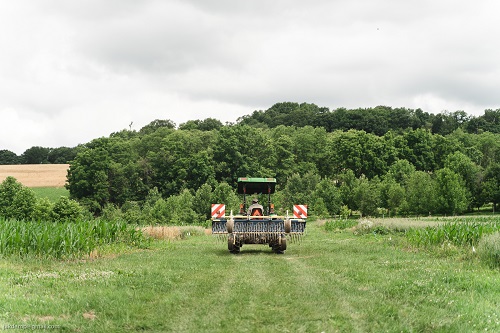 Can you tell us about some of Rodale’s current research?

1. The first and oldest, the Farming Systems Trial (FST), was started in 1981. FST is the longest side-by-side comparison of conventional and organic grain cropping systems in North America. Through this trial, we’ve learned and documented that:

"Despite all the amazing work that the Rodale Institute team and organic farmers all over have done, still only 1 percent of US cropland is organic. Until that number reaches 100 percent, I’m never going to stop focusing on transitioning land to organic.” -Jeff Moyer

2. Our Vegetable Systems Trial was started in 2015 and is designed to run for at least 20 years. It compares organic and conventional management systems for crops like potatoes, lettuce, sweet corn, and beans. The main focus of this trial is to track the degradation of soil and its impact on human health by comparing the nutrient density of organic and conventional produce grown on the site.

3. Our Industrial Hemp Trial explores industrial hemp and its ability to improve the health of our soils. Industrial hemp appears to have great potential as a cover crop in organic systems, as well as a cash crop to produce fiber, seed, oil, and more. 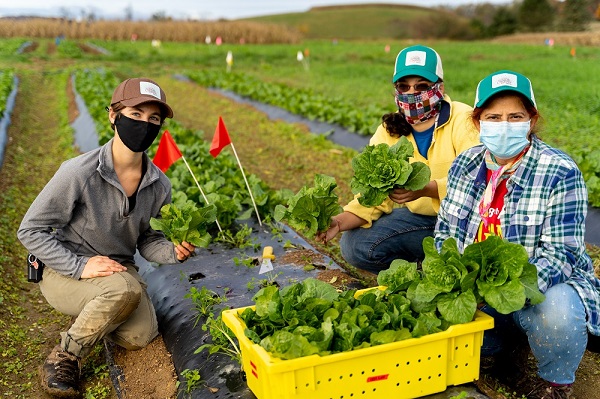 4. And finally, we’re working in collaboration with the Stroud Water Research Center on the Watershed Impact Trial, a study on the impact of farm management systems (conventional, organic no-till, organic tillage, and conservation no-till) on runoff, water pollution, infiltration rates, and more. 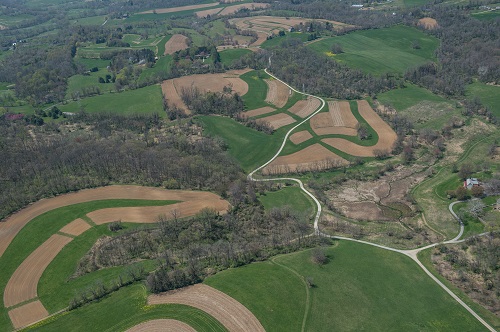 In 2019, Rodale opened three Regional Resource Centers—in Iowa, Georgia, and California. Why were those centers opened?

We’ve established ourselves as an authority and a resource on regenerative organic agriculture; however, most of our research has been conducted in Eastern Pennsylvania. Obviously, a farmer in California or Iowa does not have the same experience as a farmer in Pennsylvania. We realized that if we want to achieve our goal of increasing organic acres, we need to regionalize not only our research but our resources as well.

We established the three Regional Resource Centers in Iowa, California, and Georgia to be research and education hubs in some of the country’s agricultural heartlands. Through these hubs, we can meet farmers where they are, with research and consulting that addresses the exact issues they are facing. 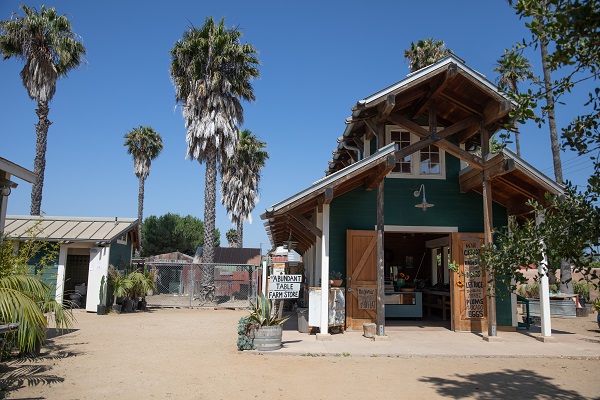 What are your thoughts on the recent ruling by the US District Court for Northern California affirming that hydroponically grown crops can qualify as certified organic?

Organic has always been rooted in soil health. That’s the basis for the whole endeavor—protecting and regenerating the soil, so we can have healthy food for healthy people. Hydroponics is a soilless system. By definition, then, it’s not organic because it’s not improving soil health. It can be pesticide- and GMO-free, and it can be a great option for people, but it’s not adhering to the foundational tenet of organic agriculture. Without the fungal networks, the microbes, the bacteria of the soil, you’re not getting the same proteins, vitamins, and minerals into the plants; you’re not supporting an ecosystem.

“We established the three Regional Resource Centers in Iowa, California, and Georgia to be research and education hubs in some of the country’s agricultural heartlands. Through these hubs, we can meet farmers where they are, with research and consulting that addresses the exact issues they are facing.” -Jeff Moyer

The word “regenerative” as it relates to farming started with Bob Rodale, son of Rodale Institute’s founder J.I. Rodale. In the 1980s, Bob realized that people were starting to talk about “sustainability” as a cure for our planet’s problems. But Bob didn’t think we were going far enough. Bob believed that “sustainable” meant staying the same—even if that meant maintaining the poor soil health that had persisted for decades prior. Instead, Bob said we should be aiming for “regenerative,” where our resources are actively improved, or regenerated, as we use them, instead of just sustained. 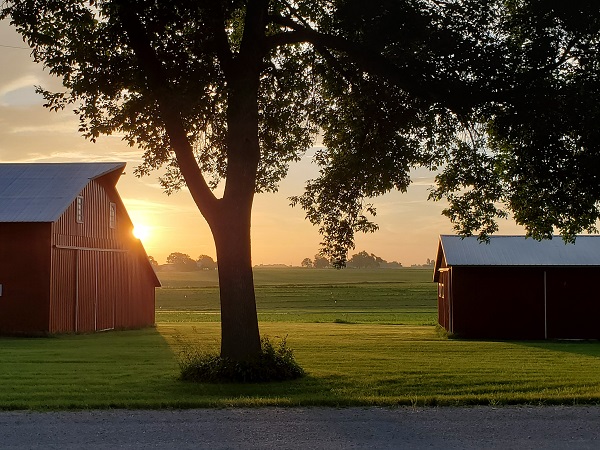 The Regenerative Organic Certification (ROC) goes above and beyond the USDA organic label. While the National Organic Program prohibits synthetic chemicals and GMOs and requires soil maintenance or improvement for soil-based operations, regenerative organic adds three more qualifications: strong soil health (including required soil testing), animal welfare, and social fairness. That means we want to farm in a way that improves the health of our planet, keeps animals free from harm, and ensures that the people planting, picking, and processing our food are treated fairly.

One farmer said it best to me when he said, "I feel like a Boy Scout with a sash full of merit badges. I'm certified organic; I'm animal welfare approved; I'm non-GMO. I'm all of these things. Can't I have one label that says it all?" ROC is the equivalent of the Boy Scouts’ “Eagle Scout” title, which reflects the attainment of multiple merit badges. ROC covers all those certifications the farmer mentioned and more.

What are the Rodale Institute’s plans for the future?

We hope to continue expanding our consulting services, with consultants at all our Regional Resource Centers—and beyond. We need to break down the barriers that prevent farmers from exploring the possibilities transitioning to organic can bring to their farms. We’ve found that one of the most impactful ways to grow more organic acres is to meet farmers where they are—and that means putting real people on their farms to talk about their particular situations.

“We hope to continue expanding our consulting services, with consultants at all our Regional Resource Centers—and beyond. We need to break down the barriers that prevent farmers from exploring the possibilities transitioning to organic can bring to their farms.” -Jeff Moyer

We are also rapidly expanding our work in human health. Our motto has always been healthy soil = healthy food = healthy people. We have a vision of regenerative healthcare where doctors and health professionals not only treat the patient, but they take a whole-systems view and integrate nutrition, how food was grown, the impact of our food system, and more into the patient’s care. We can make a real difference in the prevalence of lifestyle diseases by refocusing some of our healthcare system on not only what food people eat but how it was grown. To that end, we are working to establish a Regenerative Health Institute at Rodale, which will act as a hub for medical professionals, scientists, and farmers to meet and work together on projects that integrate soil health and human health.

Excellent California crops of organic apricots and cherries are expected to be the first two stone fruits out of the gate when shipments begin late this month and early next month, according to several industry experts.

The Organic Produce Network (OPN) and Western Growers (WG) have formed a strategic partnership reflecting the importance of organic production and announced that WG will be the presenting sponsor of the Organic Grower Summit 2021.

Nearly 30 years ago, Griffin Industries (which was later acquired by Darling Ingredients) saw increasing interest and demand for organic fertilizers. As the company looked at the market, it knew its animal proteins could and should be used as an organic fertilizer to build soil health and improve plant performance, so it launched Nature Safe in 1992.

1. How Local Organic Farms Help the Environment and You, According to a Farmer