The number of organic farms in the United States, acres used in organic production, and the value of organic products sold have increased dramatically over the last three years, with California organic fresh produce commodities leading the way, according to the National Agricultural Statistics Service’s (NASS) 2019 Organic Survey released last week.

California continued to lead the nation in certified organic sales with $3.6 billion, 36% of the U.S. total and four times that of any other state. It also led all states with 3,012 certified farms and 965,257 certified acres.

Highlights from the sales of organic fresh produce commodities include:

“The results of the 2019 Organic Survey show the continued growth of organic production in the United States,” said NASS Administrator Hubert Hamer. “These comprehensive and essential, national- and state-level data are valuable to the organic industry as well as agri-business infrastructure and programs that support the sector.”

NASS began collecting data for the 2019 Organic Survey in early 2020 as a follow-up special study to the 2017 Census of Agriculture. This is the sixth organic survey NASS has conducted and the first since the 2016 Organic Survey. 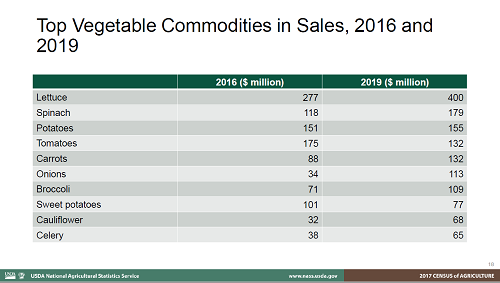 The top 2019 organic vegetable commodities in sales were (in $millions): 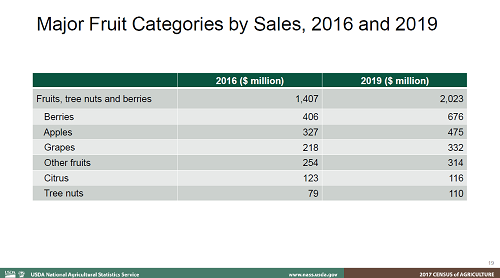 The top 2019 organic fruit categories (in $millions) were: 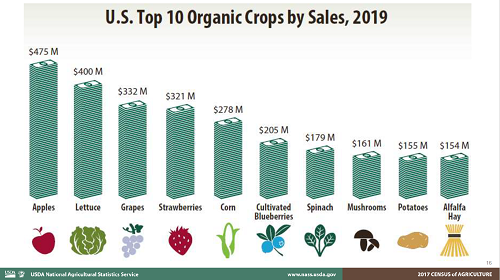 The top organic commodities with the greatest gains in sales value from 2016 were led by produce. 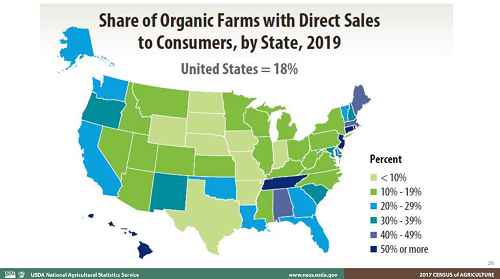 Major challenges reported for certified organic farms in 2019 were predictable:

To learn more about the 2019 Organic Report, visit: www.nass.usda.gov/organics

Avocados have been on a great run for the past 15 years with supply generally growing with demand and solid markets the norm. On the organic side, supply has struggled to keep up with demand as the per carton price has risen into the stratosphere time and time again.

Nate Lewis, owner of Oyster Bay Farm in Washington State, recently joined the Washington Farmland Trust as conservation manager for the South Puget Sound region. Nate brings over two decades of experience, including participation with the Washington State Department of Agriculture and the Organic Trade Association.

Mike Boyle is vice president of sales and sourcing at Organically Grown Company (OGC), an organic produce distributor headquartered in Eugene, Oregon. With five hubs throughout the Northwest, Organically Grown distributes organic produce north to Alaska, east to Montana, and south to the California-Oregon border. In addition to its regional distribution service, the company also acts as a national sales and marketing agent for 18–20 organic growers. Mike joined OPN for a conversation about organic produce trends, OGC’s customer base, the company’s recent brand refresh, and more.

5. Time to Bulk Up with Stemilt’s Artisan Organics Apples & Pears