We are clearly living in uncertain times, but the organic crops of California don’t know that-- and they continue to follow the well-worn path of their ancestors. As such, the transition from winter desert production to coastal California output began in earnest in late March and is now complete as we move through April.

Covid-19 has led to uneven buying by consumers which has exacerbated the natural gaps that typically occur during transition leaving some crops in short supply while others have promotable volumes. Retailers would do well to carefully plan for organic promotions as there are a basketful of both challenges and opportunities.

“We saw panic buying the first week after the shelter in place order (week of March 23) and then it was like day and night the next week as the orders stopped,” said Marliese McWherter, creative marketing manager for Lakeside Organic Gardens, Watsonville, CA.

The first week of April again saw a spike in sales for the organic grower shipper but this week McWherter said it appears that orders might be leveling off.

Lakeside Organic Gardens Owner Dick Peixoto believes it’s just human nature that has led to the current roller coaster ride. “It’s hard to tell people to stop buying so much,” he said. “The shelter-in-place order… makes them feel like they have to grab anything they can. But the food is still here. We are still growing.”

Peixoto did opine that the panic buying is compounding the problem. It makes it very difficult to know if it is a typical lack of supply creating strong sales or artificial demand that will soon right itself.

McWherter did go down a list of organic vegetable crops that are on both sides of the supply ledger. On the short side are romanesco broccoli, celery, Brussels sprouts, green and red cabbage, and many of the leaf items. She noted that much of the Watsonville and the Pajaro Valley, where Lakeside farms grows, has seen a slow start to its celery production. “We won’t start harvesting celery until May 1,” she said, indicating that second half of April could see a fast-rising celery market. 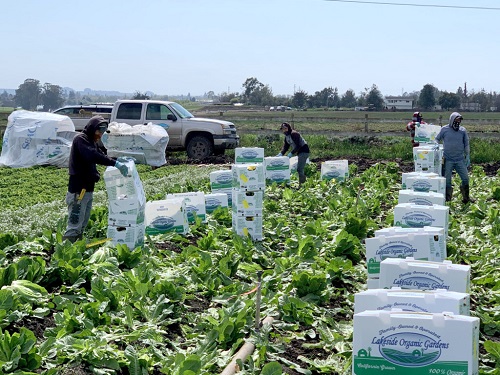 On the other hand, McWheter said there are strong supplies of red beets, Napa, rainbow carrots, all the chards, kale and fennel. She added that broccoli volume was just beginning to increase. “We should have good volume through summer.”

Down the coast in Oxnard, CA, Darrel Beyer, organic sales manager for Boskovich Farms, concurred that organic celery is in short supply. The Oxnard area is a growing region with a significant amount of celery, and he said on Tuesday, April 14 “it feels like the price is about to jump.”

He added that organic broccoli and bunch beets are also in short supply this week. He agreed that the chards and kale were plentiful, which should offer promotional opportunities for retailers and potential good pricing for consumers.

As a year-round grower in the Oxnard region, Boskovich does not deal directly with the transition from the desert to the coast, but it does impact the company. Beyer said that transition typically gives him a good marketing window for his products. This year that window came just as the panic buying began and has seemed to last a little longer because of rains during the first week of April in both the desert and the coastal regions. In fact, he said those rains will cause intermittent holes in the supply picture over the next couple of months.

With regard to the sheltering in place edicts closing down much of the foodservice industry, Beyer said that has impacted sales. While increased sales at retail might make up for declining sales in foodservice, he said there are simply fewer buyers he can call. “Chain stores are the savior, but everything is more quiet; I have fewer options every day,” he said.

Affirming the organic vegetable reports from Lakeside and Boskovich was the regular “Market Report” that Doug Classen, vice president of sales for The Nunes Company, prepared for April 10 and the following week. He reported that almost all organic items had transitioned from Yuma to Salinas. He said there were moderate supplies of iceberg lettuce, romaine and leaf items. The Nunes report noted “extremely light supplies” of broccoli with supply gaps occurring over the next few weeks. The report also said cauliflower supplies would be light and agreed that the celery market was firming up.

Total organic fresh produce sales were up 22 percent for the month of March, with overall first quarter sales up eight percent in retail conditions unlike any ever experienced in the modern era of grocery retailing, according to the 2020 Q1 Organic Produce Performance Report released exclusively by the Organic Produce Network and Category Partners.

WestFresh Distributing Inc., a successful California shipper, has solidified its standing as an organic producer with the purchase of an 80-acre ranch in the Coachella Valley.

Live Earth Products, Inc., a father-and-son-run company headquartered in Emery, Utah, provides mineral products that help enrich organic animal feed, and supplies products that can improve soil with the addition of nutrients, improving the performance of fertilizer and the water holding capacity of the soil.

2. Demand for Organic Produce Surges as Certification Adapts to COVID-19

4. China is Emerging as Leader in Sustainable & Organic Agriculture