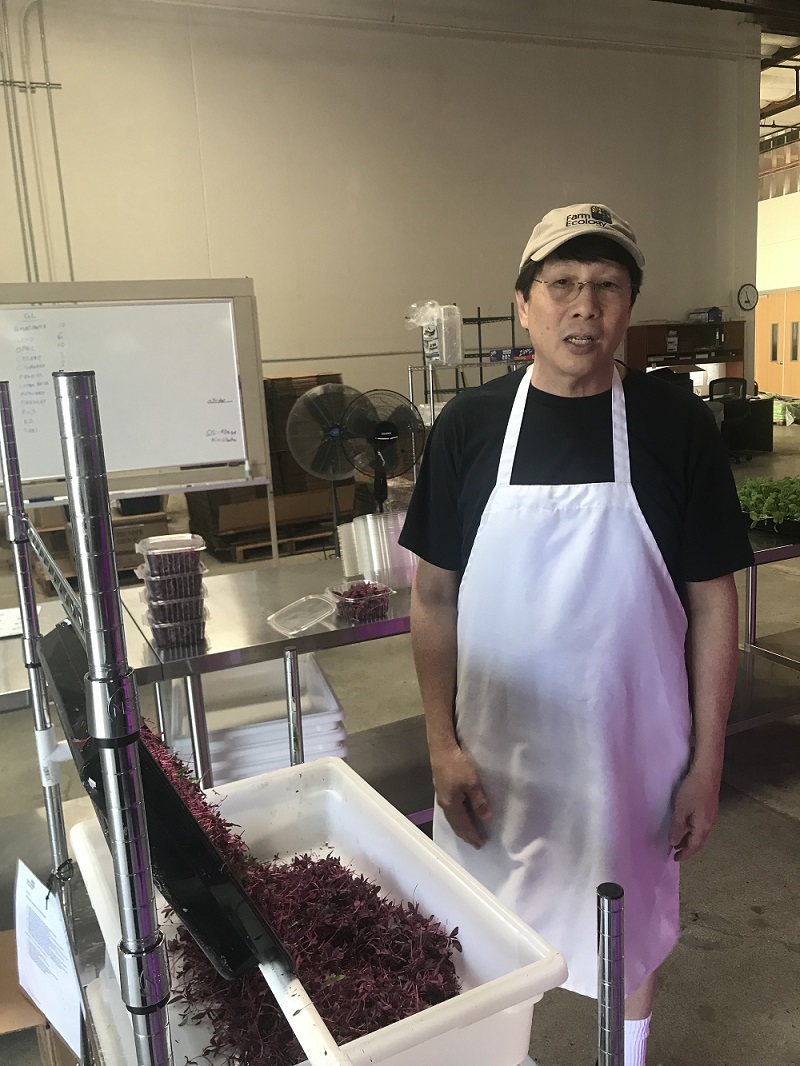 That work led to years of experimenting and the launching of FarmEcology in 2018.  The farming operation is located in a 15,000 square foot warehouse in San Jose, CA.  Today, in the early stages of its evolution to a broader scale operation, FarmEcology is utilizing about half of the available space, producing about 250-300 clamshell packages a day of certified organic microgreens and selling them to foodservice distributors and restaurants throughout the San Francisco Bay Area.

Fok set out to create a sustainable agricultural systems and he says he has succeeded, and it is profitable.  He points to the rows and rows of racks, each with dozens of trays of various herbs, edible flowers and vegetable plants and says the entire operation cost about $250,000 to get it up and running.  The trays of product are harvested every 5 to 24 days depending upon the item.  Radishes are at the low end of that spectrum while lemon balm is at the upper end.

In between are about 20 other items including mainstays like basil and arugula and more off-beat items like red-veined amaranth.  These microgreens, or petite greens as Fok calls them, are bursting with flavor, and are a favorite of chefs as they add various nuances to their unique dishes.

Fok is currently working his production with just a handful of employees who oversee and maintain the lighting fixtures, the computer irrigation systems and the planting, care and harvesting of the trays.  A hand-held power clipper device is used as a mower to harvest the crop. Fok said each tray weighs no more than 10-pounds, which allows it to be easily handled as it moves through various cultural practices. 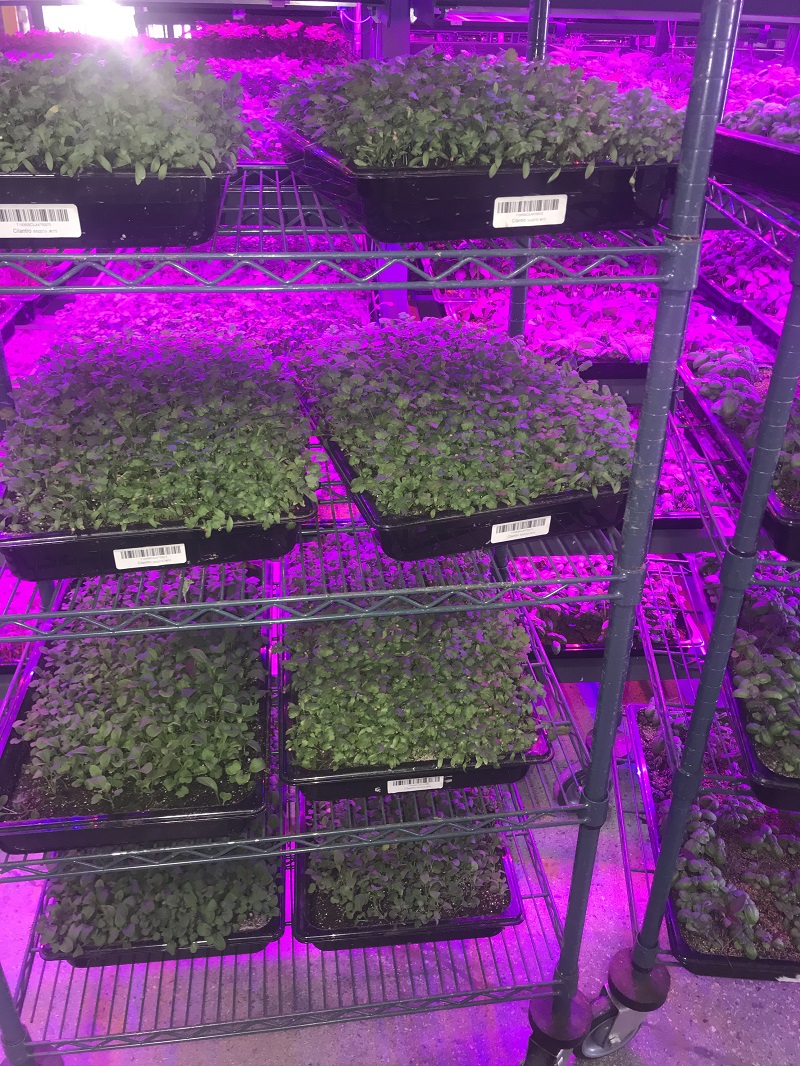 He said the process is a closed loop system that is completely sustainable and produces no waste nor runoff.  The trays have no drain holes so the water is exactly measured to serve the needs of the plant.  Each tray is watered every three days with 100 percent of the water being utilized by the plant or is loss through evaporation.  There is no runoff to contend with.  Each tray has a barcode that is scanned into the computer and then the right amount of water for the plant is automatically released into the tray.

The plants grow in dirt that has been certified to be organic. After each harvest, the tray’s dirt is dumped into a tank where it is mixed with dirt from other containers as well as a “small amount” of organic fertilizer.  It is then reused.

Because the dirt comes from many different trays of many different products, the system offers a natural crop rotation program for the soil, according to Fok.  The company CEO said using dirt is an important part of the equation.  Hydroponics, he believes, is a complicated process that requires constant monitoring and adjusting of the makeup of the water to produce good crops. 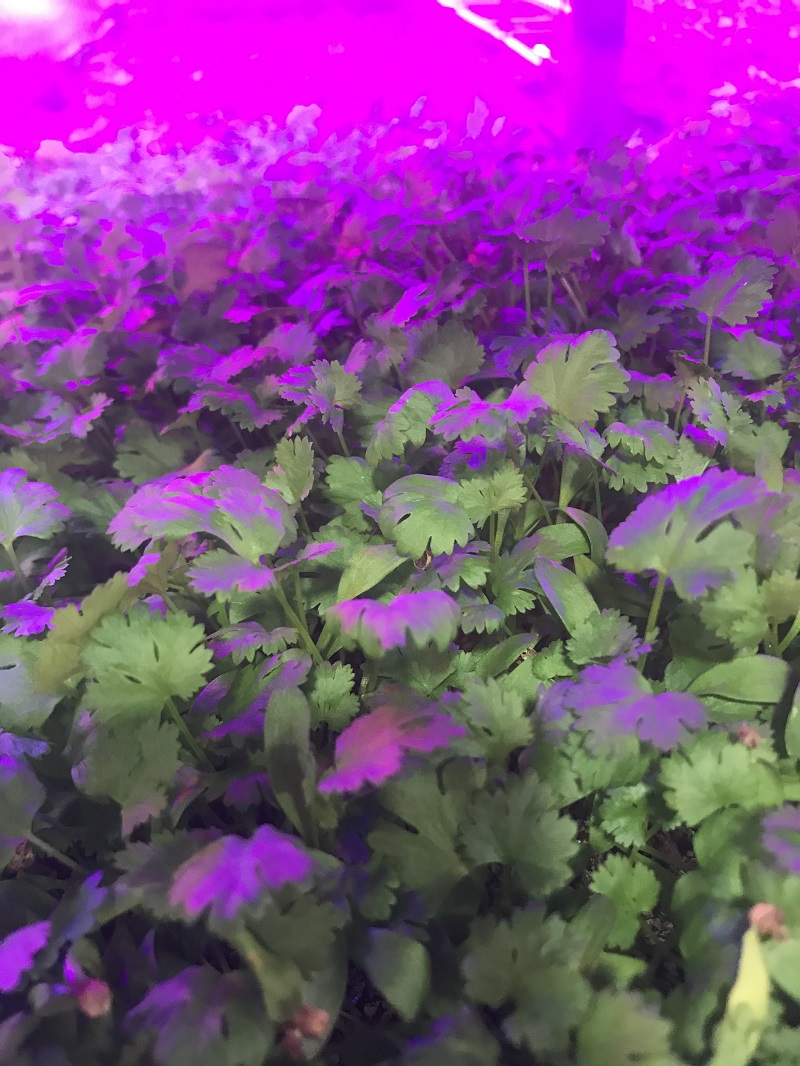 Like in nature, he said, soil is an amazing, and not totally understood, medium that gives plants the nutrients they need to grow and produce healthy crops.  He noted that you can measure the nitrogen, potassium and phosphorous that are in a soil sample but there are clearly many other elements that allow farmers all over the word to successfully grow fruits, vegetables and herbs.

A custom lighting system has been developed consisting of blue and red light, which Fok said is all that is necessary to grow plants indoors. While his current operation is almost exclusively small greens being grown in shallow trays for foodservice operations, FarmEcology has deeper trays which he said could easily grow lettuces or a host of other full-grown crops in a sustainable, economic fashion indoors and in dirt.  The team is constantly experimenting with different items as that will surely be part of the value proposition as FarmEcology attempts to partner with others and expand to urban areas all over the country.