“Last year, I worked hard to pass a bipartisan farm bill that benefited our producers on the Central Coast. We were able to secure strong funding for agriculture research, including critical investments in the Organic Agriculture Research and Extension Initiative (OREI), establishing permanent mandatory funding of $50 million per year by 2023,” said Congressman Panetta. “I appreciated being able to see the local projects that benefit from these programs right here at U.C. Santa Cruz, and speak with our farmers and researchers about their work.” 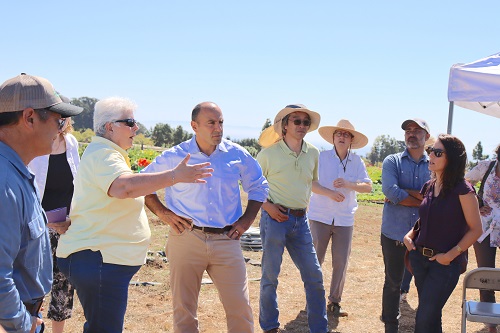 Following a welcome by Daniel Press, associate dean of social sciences, professor and executive director of CASFS, Carol Shennan, head researcher at the Shennan Lab showcased her work on Anaerobic soil disinfestation (ASD), which has emerged as a promising alternative to fumigation. The disinfestation process is especially important in strawberries for controlling of some major soil borne pathogens. ASD is now being used on 2000 acres of strawberries in California and is being tested in other cropping systems for disease control.

OFRF made the initial seed grant to UCSC for the ASD project with led to a larger USDA OREI grant. Subsequent grants of more than $8 million have been awarded for UCSC and collaborators in other states to further explore non-fumigant strategies in strawberry production. 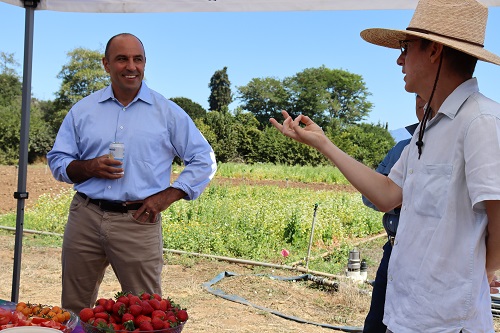 Shennan told the walking tour that “Most of the testing is being done on farm with growers in California. It works out great because the researchers get to talk to farmers that are benefiting from the results and have discussions about organic agricultural research and funding. The grower network is important to get feedback on the efficacy of our work.”

The project started 30 years ago when there were very few organic strawberry farmers. Today about 30-40 percent of all strawberries in California are organic and about 13 percent of those use ASD to control disease. Conventional berry growers are also benefiting from the research and using ASD.

Brise Tencer, the executive director of OFRF said, “Time and again our seed grants have helped researchers obtain the initial data they need to apply for OREI and other federal funding sources.  The work being done at the Shennan Lab is a perfect example of that.” 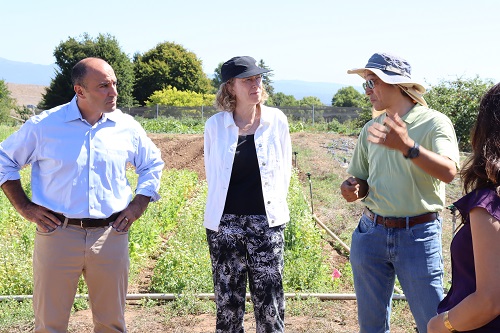 Unfortunately, grant money is being delayed for new organic research because of the recent changes at USDA. The administration has relocated the Economic Research Service and the National Institute of Food and Agriculture to Kansas which has resulted in attrition of employees.

Brise told OPN, “There are a lot of staff that won’t be making the move to Kansas. We are losing a huge knowledge base and that’s a serious concern for the future of publicly funded scientific research.”

As part of the tour, Congressman Panetta met Joji Muramoto, a longtime research associate with UCSC and the first ever cooperative extension specialist dedicated to organic agriculture.

In his new role Muramoto will coordinate a statewide program focused on the organic production of strawberries and vegetables. 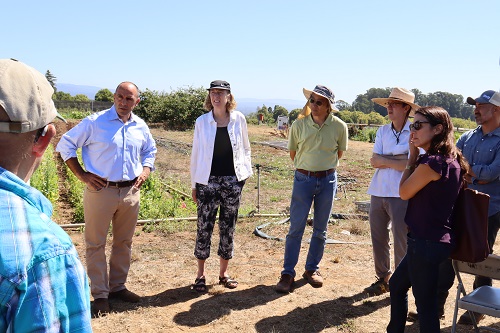 “UC Santa Cruz is very fortunate to have the very first Cooperative Extension Specialist in Organic Production in the entire University of California system. Our new specialist is Dr. Joji Muramoto, who has over 20 years’ experience working with growers to identify and solve major challenges in organic production, whether these involve disease management, pest control or fertility inputs. Dr. Muramoto’s new position signals an expanded role for land-based, applied organic farm research at UCSC,” said Press.

Congressman Panetta learned UCSC’s Environmental Studies Department and CASFS are working to institute the first ever bachelor of agroecology major in the state. The major hasn’t been approved yet, but there are currently 150 students enrolled in the environmental studies program who would likely instead enroll in this new major if, and when, it is approved.