Drew and Joan Norman have farmed One Straw Farm since 1983, when they purchased 83 acres in northern Maryland. From the start, they adopted organic farming practices that respected the soil, water, and opulent biodiversity gracing the rolling countryside. They learned how to battle weeds and pests and navigate market conditions. But they never dreamed their biggest battle would be with the U.S. Department of Agriculture.

Drew and Joan Norman and family.

One Straw Farm is well known in culinary corners and farmers markets around Baltimore. It was one of Maryland’s first certified organic farms, having initially achieved that status through Organic Crop Improvement Association International in 1986—before USDA Organic existed. Business flourished, with earliest offerings including certified organic chard, collards, eggplant, kale, squash, tomatoes, and watermelon.

To fight weeds, the Normans typically relied on covering rows of vegetables with plastic mulch. USDA’s National Organic Program allows certified organic farms to use “plastic mulches and covers provided they are removed from the field at the end of the growing season, and they are petroleum-based, but not polyvinyl chloride [PVC],” as noted in a USDA Agricultural Marketing Service document, “Allowed Mulches on Organic Farms and the Future of Biodegradable Mulch.”

Despite plastic being allowed, for the Normans, that mulch compromised the integrity of the farming they otherwise did with great dedication to environmental stewardship. They were sending four dumpsters of plastic mulch, equal to 45 miles of it, to the landfill each year.

When a biodegradable option came along—a cornstarch-based mulch film made with GMO-free corn—they decided to try one roll. It worked great, so they switched to the new mulch in 2009. It was certified biodegradable by a third-party agency, and their understanding of USDA regulations at the time was that it was allowed. The April 2009 USDA “Mulches for Organic Farming /Conservation Job Sheet 484.1,” for example, included “Weed problems may be controlled through: Mulching with fully biodegradable materials.’”

But the USDA interpreted things differently. In February 2012 USDA told Drew and Joan they had three choices: (1) stop immediately, and you won’t be penalized; (2) fight us, and you’ll absolutely lose; or (3) withdraw your organic certification, and when biodegradable mulch is approved, reapply for certification.

So, they took the leap and decertified the farm. As Joan explains now, “We thought it was going to change quickly. Biodegradable mulch is allowed in organic production in other countries.”

As she testified October 15, 2012 at the National Organic Standards Board meeting, “We have a large CSA [Community Supported Agriculture membership] . . . and we polled most of them and asked them their opinion on this.  And all of them said if we were not using [the biodegradable mulch] that we would be environmentally irresponsible, and they would not want to get food from us.”  Joan notes “our wholesalers said reducing the amount of plastic we use was a good choice,” yet losing their organic certification meant strictly organic wholesalers could no longer buy from them. As she told the NOSB at the fall 2012 meeting “we gave up $100,000” that year “to not sell [certified] organic produce.” 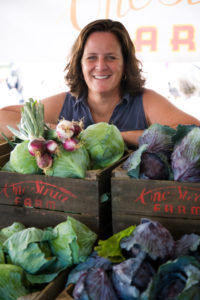 On October 18, 2012, NOSB voted 12:3 to approve use of biodegradable mulch. Joan recalled, “We thought, at that point, we were done and could get on with our paperwork.”

The rulemaking proceeded, and on October 31, 2014 they received a phone call saying biodegradable mulch was approved for organic production.  Then on January 9, 2015, they received another phone call, indicating that a memo had been added. It stipulated biodegradable mulch must be 100% bio-based; it can’t contain any petroleum products. As approved January 22, 2015, “NOP 15-1 Biobased Mulch Policy Memo” stated: “Biodegradable mulch film that contains non-biobased synthetic polymer feedstocks, such as petrochemical resins, does not comply with the USDA organic regulations.”

“That wasn’t part of the NOSB discussion [at the fall 2012 meeting preceding the vote],” Joan said. She added that to her knowledge, “There is no product in the world that exists like that! That’s like giving a permission slip to somebody who’s going to time travel."

In order for things to get better, you have to start somewhere.

Joan and Drew traveled to many NOSB meetings to testify and urge the board and NOP to withdraw that memo. The Normans wanted organic farmers all over the country to have the option of biodegradable mulch in their toolboxes. Joan remembers that when the Normans testified at NOSB’s November 3, 2016 meeting, a German microbiologist was there who had studied biodegradable mulch for 20 years; she’d found no toxins after it broke down.

In the meantime, things changed in the market and at One Straw Farm. Joan explained, “We had wholesalers saying they needed more local organic produce, so my son said, 'let’s start using it again.'” And they did. With their resumption of using plastic mulch, their farm’s organic certification was restored. All but 15 acres is currently certified organic.

Drew misses the advantages of the biodegradable mulch. He said, “All of our cover crops could be planted faster in the fall. I have times when I can’t get them planted because of weather. It eliminates several tractor passes in the fields and buys more time; you’re not picking up plastic—which means time, labor, and more petroleum.”

Sometimes you have be the first to push the envelope forward.

While they continued to build soil fertility and honor the biodiversity of the land with organic practices, Drew and Joan had been willing to sacrifice their organic certification for the wider good of the environment and true sustainability. Drew explained, “If I’m going to be the best farmer, I have to make the best choices—and I can’t wait for the government to catch up. Meanwhile, we now use plastic mulch, and we pull it up and put it in the landfill.”

Drew and Joan will press on in petitioning the NOSB about biodegradable mulch until the NOP approves its use in organic production. This is one straw that will not break their spirit for continuous improvement.

Last week the Senate Agriculture Committee advanced its bipartisan farm bill by a vote of 20 to 1 after a markup that was notably free of party politics. This bill titled the Agricultural Improvement Act of 2018 is largely a continuation of the last Farm Bill except for the big gains made for organic agriculture.

Randy Riley will be a panelist on The Retailer Roundtable at the Organic Produce Summits next month in Monterey, CA. OPN sat down with Randy to learn more about Kroger’s innovative growth in organics, upcoming trends and how their new partnership with Ocado will help fuel growth.

While predictions are challenging, the overwhelming demand for organic mangos from Mexico has producers reporting slightly higher than normal volume as the country enters peak production from key shipping points.