When Bianca Kaprielian was growing up on her family’s multigenerational stone fruit farm in the San Joaquin Valley, her parents tried to convince her not to become a farmer.

“‘Don't go into ag—this is a really hard life,’” Kaprielian recalls them telling her. “‘Go get a nonagricultural-based education and figure out what you want to do that you love.’” 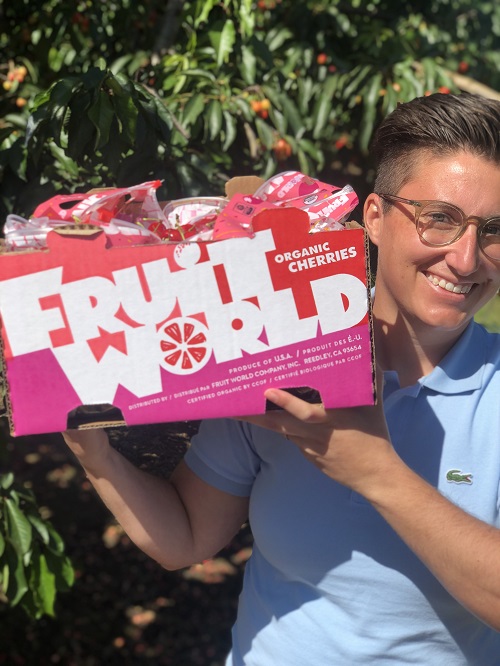 So she heeded their advice and headed out to the East Coast for college, where she got a degree in social issue documentary filmmaking.

While working in New York City in the film industry, Kaprielian found herself repeatedly drawn to stories involving food and agriculture—and she also started missing California. “I didn't realize how much I loved where I came from until I left,” she says.

So she decided to move back to California and make the shift to an ag-related career path by enrolling in the apprenticeship program at the Center for Agroecology and Sustainable Food Systems at UC Santa Cruz.

While working in New York City in the film industry, Kaprielian found herself repeatedly drawn to stories involving food and agriculture—and she also started missing California.

“I came from a family of conventional growers, and personally my values are more along the sustainable and organic lines,” says Kaprielian. “And so I really wanted to be able to learn how to farm organically and know how to talk to my family about transitioning over our land.”

After Kaprielian completed the apprenticeship, she went on to become a buyer for Veritable Vegetable and later for Whole Foods. 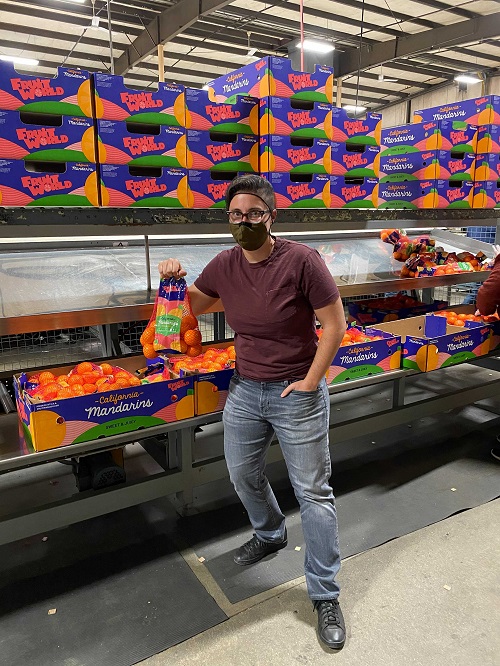 One day in late 2016, she got a call from her dad, who told her that the large marketing company that represented her family’s fruit had decided to stop selling California mandarins. (Kaprielian’s father had transitioned the family farm from stone fruit to mandarins in 1994.)

“So my family lost their marketer, and my family's packing house lost their one customer,” says Kaprielian. “And so my dad called, and he was excited, and he said, ‘You've been wanting to figure out a place for yourself. Well, here's the perfect opportunity. We need to create our own sales company.’” 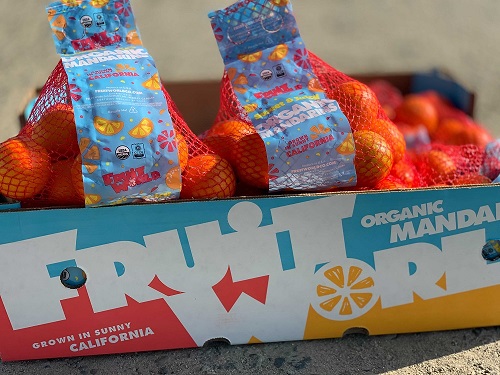 While Kaprielian says the idea of starting a company was scary, she also felt like it was a window of opportunity that she couldn’t pass up—so she decided to go for it. Her father suggested that she connect with CJ Buxman, a local farmer who’d grown up on a stone fruit farm on the opposite side of Kaprielian’s hometown of Reedley. At that time (in 2016), Buxman was farming solely citrus, which was packed in Kaprielian’s family’s packing house and sold by the same big marketing company.

While Kaprielian says the idea of starting a company was scary, she also felt like it was a window of opportunity that she couldn’t pass up—so she decided to go for it.

Like Kaprielian, Buxman had also left farming for other pursuits after high school. He got a bachelor’s in engineering and a master’s in accounting and was working as an IT business consultant in 2012 when his father called him asking if he could help out with the family farming business (the market conditions for conventional stone fruit had grown very unfavorable, and the company was struggling). 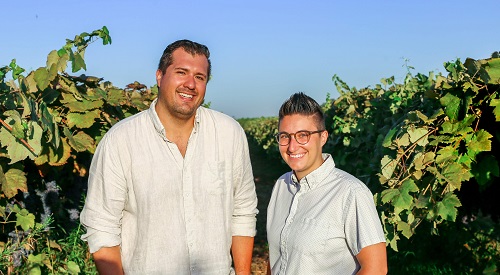 Buxman, who had not been enjoying the sedentary life of an office job and missed farming, leapt at the opportunity and moved his young family to Reedley. He planted some citrus acreage (and later grapes and stone fruit) and began transitioning the farm to become certified organic. 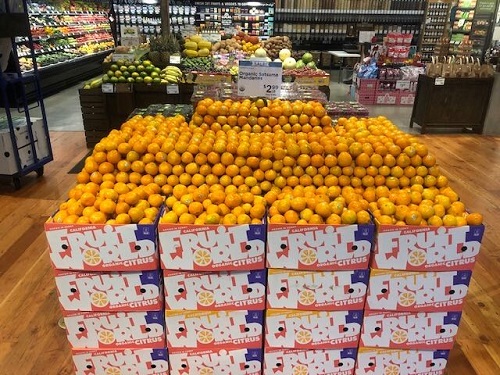 Following her father’s suggestion, Kaprielian reached out to Buxman to see if he’d be interested in creating a sales company with her to market their families’ fruit. “After hours and hours and hours of conversations, we decided to launch Fruit World in 2017,” she says.

“I chose to farm organically because I believe that the benefits impact the whole system—our families, our communities, and our world, making the environment a healthier place for our generation and future generations to come.” -CJ Buxman 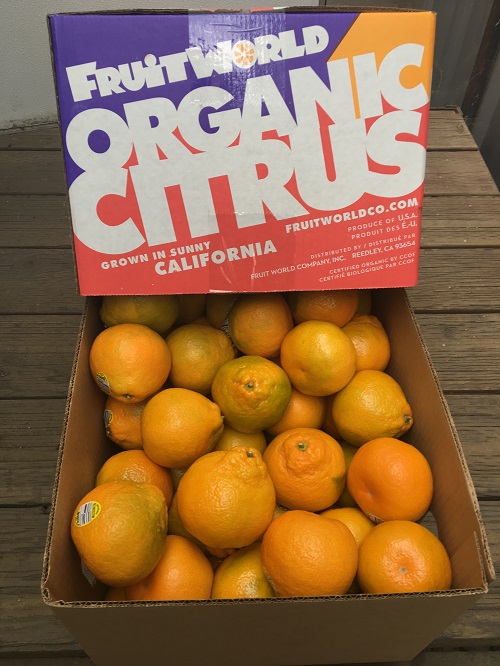 The company offers year-round programs of organic lemons and oranges (navels during the cooler months and Valencias during the summer). It also offers multiple varieties of organic mandarins as well as organic grapefruit, limes, and specialty citrus (including Meyer lemons and blood oranges). 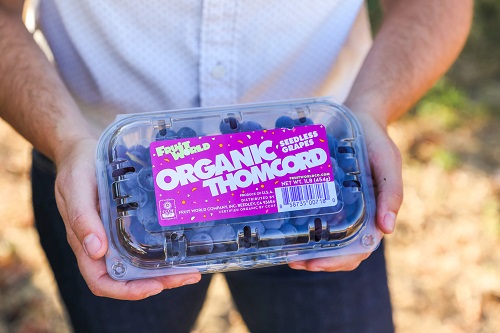 While it does offer conventional mandarins and apricots, Fruit World is primarily an organic operation. Currently, its growers’ acreage is about 82-percent organic. “Our goal is to be 100-percent organic,” says Kaprielian. “It might take a while, but that is definitely our goal.”

The company sells the majority of its fruit to wholesalers and retailers, some of which include Veritable Vegetable, Organically Grown Company, Earl’s Organic Produce, Whole Foods, Sprouts, and Central Market (owned by H-E-B).

“Our goal is to be 100-percent organic. It might take a while, but that is definitely our goal.” -Bianca Kaprielian

When Kaprielian and Buxman first founded Fruit World, they decided they wanted to do something “fun and different” for their branding and packaging, so they came up with a bright, bold retro-inspired look. “We wanted to stand out and make a splash,” says Kaprielian. “We want you to walk into a cooler and know that's Fruit World right off the bat.” 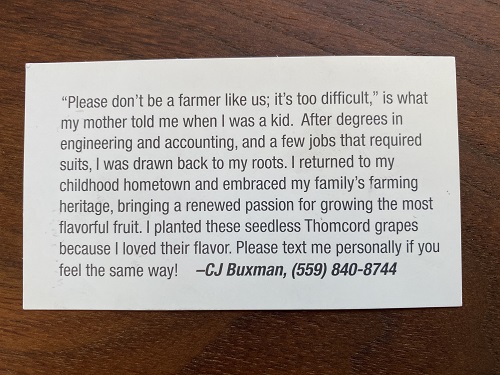 The company has also developed some unique marketing efforts. For example, during grape season, they put a small card inside each package of organic Thomcord grapes that tells the story of Buxman’s return to farming. The card also gives a phone number for consumers to text if they enjoy the fruit.

“We wanted to stand out and make a splash. We want you to walk into a cooler and know that's Fruit World right off the bat.” -Bianca Kaprielian

“There's only a couple organic Thomcord grape growers—and we're one of them,” says Kaprielian. “It's definitely a feather in our cap. We get up to 30 texts a day during grape season and respond to all of them. People text us saying, ‘My picky kids love these grapes. Here's a photo of them eating them!’ and ‘These grapes brought tears to my eyes. My family had a Concord grapevine in our backyard growing up, and I haven't tasted this flavor since I was a child.’ Such great stories.” 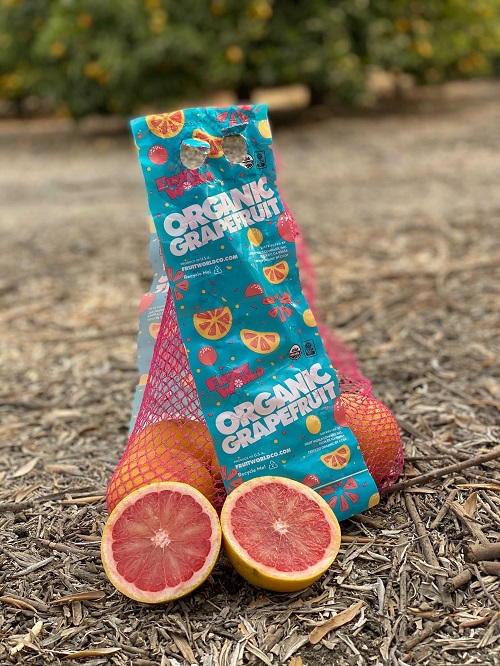 In terms of adding new growers to the Fruit World roster, Kaprielian says, “We are always open to working with new growers that fit within our mission. We want family farms to have a sustainable outlet. If there's a grower out there that wants to keep their land family-farmed into future generations, that's where we have an opportunity.”

Overall, she says, “We're in a really great spot. When CJ and I have had a chance to sit back and look at where we are, we're pretty amazed and proud of how far we've come in just a few years.”

Organic avocados are currently in a demand-exceeds-supply situation, with pricing topped out but expected to stay steady through May.

Total organic fresh produce sales for the first quarter of 2021 saw a continuation of last year’s growth, increasing by 9.3 percent from the same period in 2020 and topping $2.2 billion for the quarter, according to the Q1 2021 Organic Produce Performance Report released exclusively by Organic Produce Network and Category Partners.

Offering high-quality table grapes and hothouse vegetables, Divine Flavor's commitment to preserving the land its products are grown on ensures it’s producing the most healthy, delicious, and nutritious fruits and vegetables it possibly can.