As one of the nation’s largest retailers, Costco has publicly advocated for increased production of organic fresh produce items. It is the chain’s member shoppers, however, who are driving organic sales growth as they vote with their dollars, according to Frank Padilla, vice president and general merchandise manager for meat and produce, of the 800-store worldwide chain. 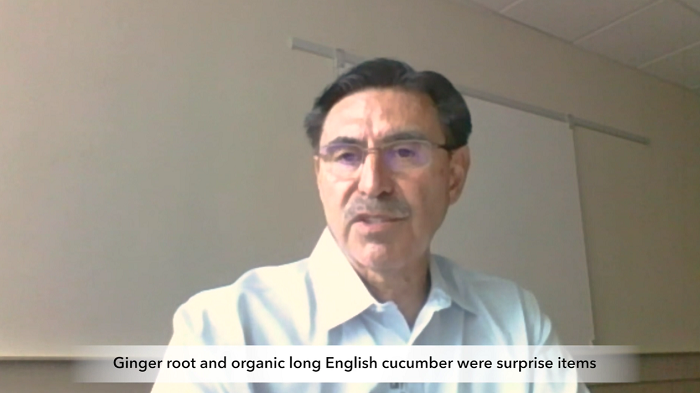 Speaking with Organic Produce Network co-founder Tonya Antle today during an exclusive OPN virtual event, What a Year it’s Been, So Far---Organics in 2020, the Costco executive said the past five months under pandemic conditions have been challenging and forced the retailer to be “nimble” as it worked with suppliers to meet unprecedented consumer demand. Padilla said the company’s supply chain has worked very well during the pandemic, helped by its commitment to the organic category, which in turn, has become a priority for many produce suppliers. Padilla also said ideal growing conditions made for greater availability of supplies during the early stages of the pandemic.

Costco initially concentrated on core organic items, but Padilla said as the supply chain has improved, Costco has expanded the organic SKUs available to its members. He noted that both organic ginger root and organic long-English cucumbers have registered surprising sales gains during the pandemic.

Costco increased sales on many staple items including potatoes, bananas, and citrus, which were indicative of the early panic buying that took place across the retail sector. Padilla said shoppers also bought many items that helped them be creative in meal preparation, as they hunkered down and cooked more at home. “Some of the surprises included organic Brussel sprouts, organic mushrooms and cremini mushrooms…these are the kinds of things that people are adding to their menus,” he said. 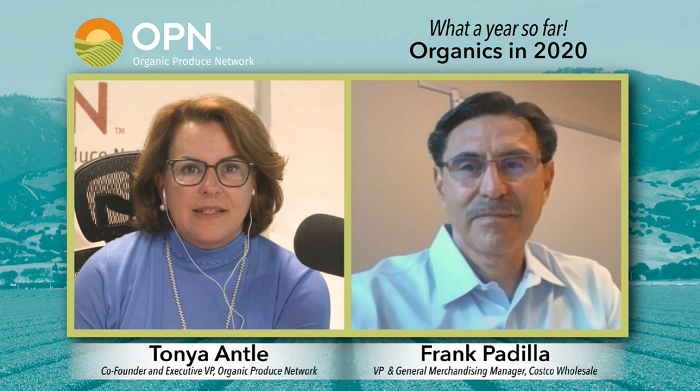 Antle also explored the expansion of direct-to-consumer options that Costco has utilized, including its relationship with Instacart. Padilla said organic produce sales have done well in the direct-to consumer channel, indicating that those shoppers have the means and the desire to promote their health through their buying habits. The Instacart relationship has also allowed Costco to expand its reach as the in-store Instacart fulfillment shopper is the person with the membership and non-Costco members can take advantage of that. Padilla said that relationship has increased on-line sales and organic produce sales have grown as a result.

The convenience factor of online shopping is beneficial to Costco and its customers, but Padilla said brick & mortar locations and the “treasure hunt” atmosphere that is core to Costco’s value proposition will continue to be very important. “We need that,” he said of the feel of in-person shopping. 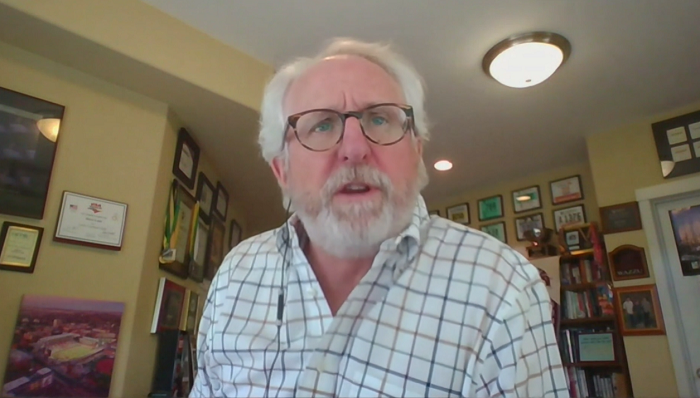 Regarding the in-person experience, Padilla said Costco has curtailed its renowned sampling and demo program in light of the pandemic conditions. As the retailer sells many items in large, bulk packaging formats, the longtime produce merchandising expert said giving the consumer the opportunity to sample a product is an important part of its “treasure hunt” strategy. “We don’t know when that’s going to come back, but it has been impactful,” he said.

Padilla gave a full-throated endorsement for the retail community and how it offers a great outlet for organic producers. He said retailers are in a very good position to serve the organic suppliers and in these times when sales are spiking, and he reminded others to remain committed to organic production and organic producers. “Retailers can do organics better than anyone,” he said. He also encouraged suppliers to get out to stores to look at their product on the produce shelf and see how it compares to the conventional product in terms of shelf life, quality, and value. “Might benefit everyone to see how your product is standing up out there,” Padilla advised.

“Retailers can do organics better than anyone." -Frank Padilla

The OPN event also featured Steve Lutz of Category Partners discussing how well organic sales have done during the pandemic. The produce industry veteran said organic produce sales have experienced “no erosion” during the pandemic and continue to out-perform conventional sales and volume growth within the produce category. While this is being driven by consumers across the category, Lutz said, there is apprehension that the “casual organic shopper” might alter his or her buying habits as prices climb. There is indication that retail produce prices are on the rise and Lutz said the “causal organic shopper” is more price sensitive that then committed organic produce devotee. 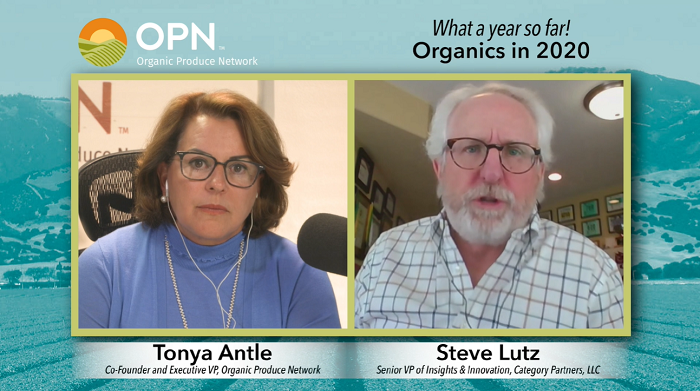 Surveying the numbers, Antle noted that while organic produce continues its impressive double-digit growth on an annualized basis, it appears to have difficulty capturing more than 10 percent of total produce sales. Lutz believes that is a function of availability, and lack of supplies prevent the category from climbing well beyond that benchmark.

Lutz noted that in July, organic produce sales represented almost 12 percent of total produce sales. This, he said, was the result of increased organic production during the summer, with some fruit categories outperforming that percentage marker simply because summer is the heart of fruit season.

As the price gap between conventional and organic produce narrows, Lutz said, organic sales will increase. On average, he said the retail price of organic produce is twice that of conventional produce. Illustrating his point, Lutz noted that in high volume categories, such as bananas, carrots and apples, the price gap is typically much smaller and organic sales do account for a far greater percentage of sales.

The full session is available for viewing here (no registration necessary): https://vimeo.com/446111251

Since diving into organics in 2007, Progressive Produce has built a substantial organic potato, onion, and yam program and become a recognized industry leader.

Shenandoah Growers has become a major national company that sells a wide variety of organic herbs, lettuces, and stir-in purees under the brand name “That’s Tasty.”